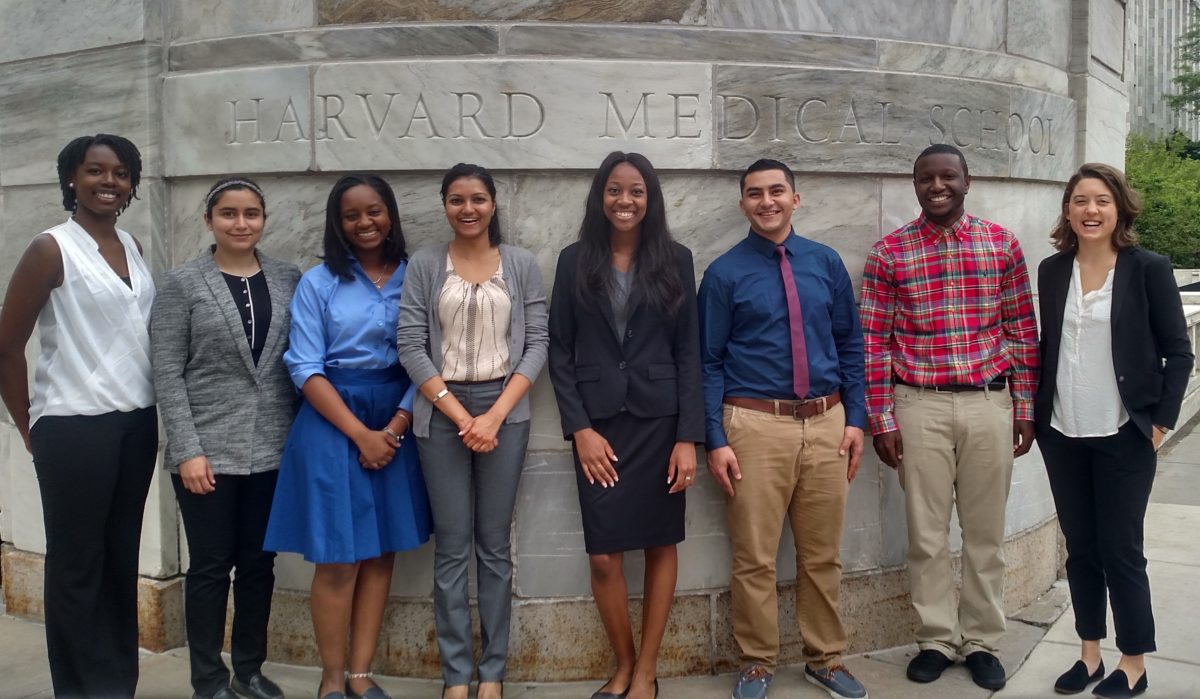 They spoke of genetic profiling, sepsis biomarkers and the search for small molecule immune system activators, sounding much more like clinical researchers than college students.

But the eight participants in this summer’s Harvard Catalyst Summer Clinical and Translational Research Program (SCTRP)—chosen from hundreds of applicants—are undergraduates, and they presented their research results at a closing ceremony at Harvard Medical School on Aug. 13.  They were part of the School’s larger effort to catalyze diversity among the next generation of students who may be contemplating careers in clinical and translational research.

“This was a program where we could really see our leadership and critical thinking skills in the making. I’ve grown a lot this summer,” said Hillary Yeboah, who is majoring in biology and society at Cornell University.

The SCTRP, along with the eight-week summer Visiting Research Internship Program (VRIP) for medical students, are part of pipeline efforts spearheaded by the Harvard Catalyst Program for Faculty Development and Diversity Inclusion.

She sifted through search log data, looking for patterns in the way physicians were using the system, which serves as a central repository for patients’ clinical information.

Her work is now being used by her mentors to create algorithms that will quicken the search and decision-making process for physicians using electronic health records (EHR).

Yeboah discovered, for example, that radiologists use the EHR system the most, and they tend to look up patient information by body part.

Currently, it takes much clicking and searching for the physicians to find what they are looking for. It might be better if a physician could type “ab” and the letters were recognized as abdomen, with the patient’s recent abdominal MRI results popping up.

Carol Martin, program manager in the Office for Diversity Inclusion and Community Partnership, was not surprised at the high level of work demonstrated by SCTRP participants.

“It’s our expectation that they work at this level,” Martin said.

“What Hillary did for us has never been done before,” said Garry Choy, instructor in radiology at Massachusetts General Hospital; Choy is Yeboah’s mentor along with his colleague, Synho Do, an HMS instructor who works in the Laboratory of Medical Imaging and Computation at Mass General.

In fact, added Do, “We are learning through teaching. Her questions required us to really think about our approach.”

SCTRP projects are tailored to the students who are accepted into the program. From among the potential Harvard faculty who volunteer, mentors are chosen who can offer the laboratory experience each student is seeking.

Sloane Mebane, a biology major at Hampton University in Virginia, wanted to better understand molecular biology procedures. She had heard about techniques such as Western blotting in class and wanted to learn more by practicing them herself.

“I wanted to learn five new things this summer, and I learned far more than that,” she said.

Mebane’s mentor, Michael Whalen, HMS associate professor of pediatrics, has a translational neurosciences laboratory at Mass General; he studies the long-term cognitive effects of multiple concussions and how to reverse them.

“There are 1 million or more cases of sports-related concussions annually among teens, and the long-term effects on the brain aren’t clear,” Mebane explained.

Participating in Whalen’s research involved refining a mouse model of repetitive concussions in adolescents, with Mebane performing a variety of histopathological and functional tests and witnessing deep brain stimulation.

Whalen saw a transformation in her over the summer.

“At first, I’d teach her a technique and she did that technique for a week,” he said. “But by the last several weeks, Sloane was multi-tasking and easily juggling three experiments at one time, interacting with adults in the lab.”

Age doesn’t matter when it comes to learning successfully in a lab, Whalen said.

“I’ve had high school students in my lab. If they are determined to learn and willing to participate, they will thrive and flourish, and become independent quickly. That’s what happened with Sloane,” he said.

“I’ve had high school students in my lab. If they are determined to learn and willing to participate, they will thrive and flourish, and become independent quickly. That’s what happened with Sloane,” he said.

Michael Super, senior staff scientist at the Wyss Institute for Biologically Inspired Engineering, also marveled at the “tremendous amount of work accomplished and the provocative results” that were achieved by student Amina Rahimi from Virginia Polytechnic Institute and State University during the 10 weeks she spent investigating biomarkers for sepsis in a pig model.

Student Mario Soliman from Pennsylvania State University actually found “a molecule of interest” in screening molecules that were thought to harness or enhance the immune system’s ability to fight cancer.

“This work opens up new doors to follow up,” said Peter Koch, a graduate student in the laboratory of Soliman’s mentor, Timothy Mitchison, deputy chair of the HMS Department of Systems Biology.

Sixty students have participated in SCTRP since it launched in 2009.  As of this year, 31 of those students are now in medical school (four at HMS), three are in PhD programs, and four are medical residents (two at HMS hospitals).

“When you hear someone say you can’t get much done in 10 weeks, think of these students,” said Martin.