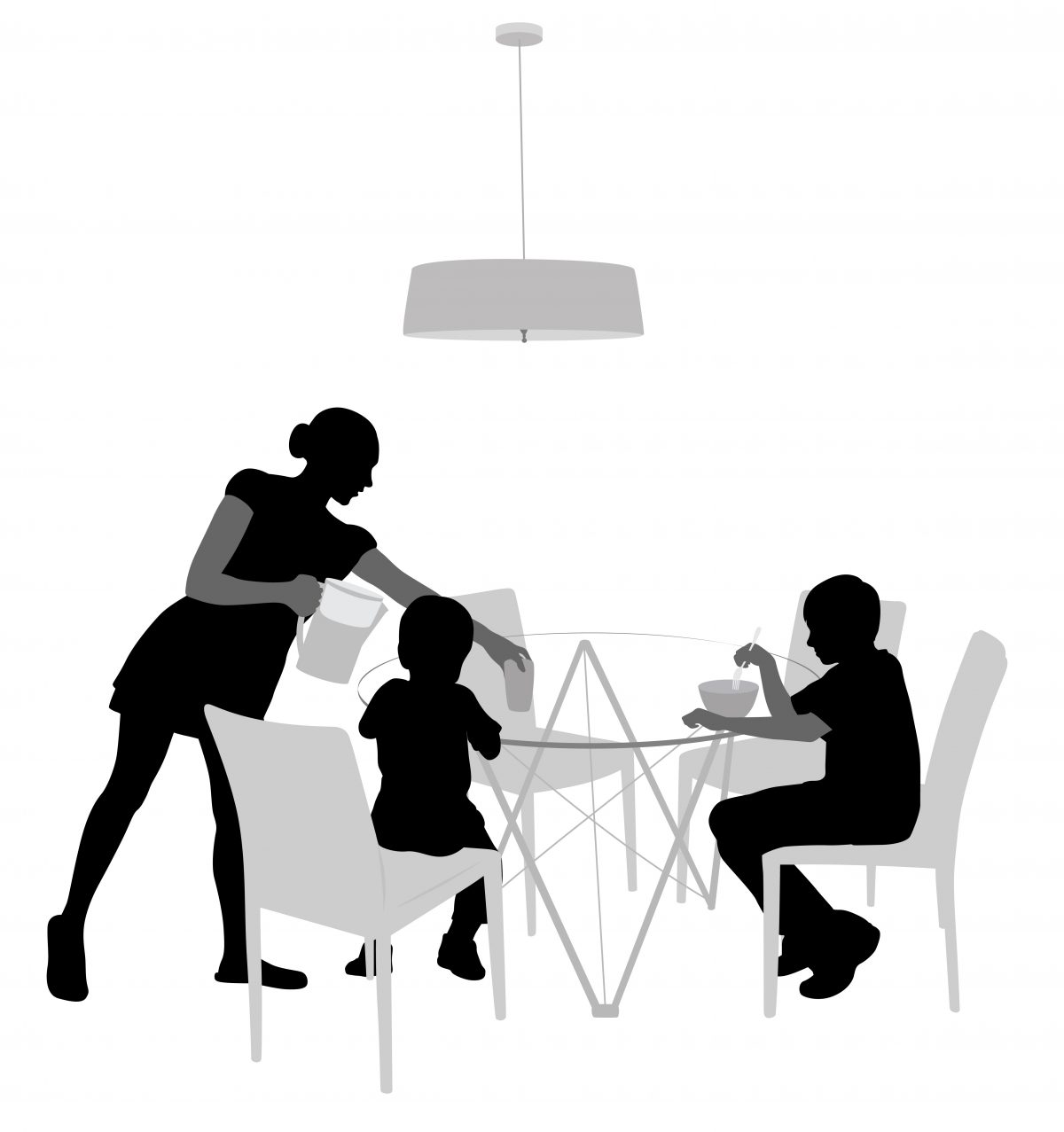 For years, scientists have known about the “couch potato” rat. If the mother rat is undernourished during pregnancy and her offspring is over-nourished after it’s born, the baby will likely end up having high blood pressure and insulin resistance and will become overweight as an adult animal.

These traits do not have genetic roots. A rat with identical genes that is provided with normal nutrition both in utero and after birth will be trim and healthy, explained Matthew Gillman, professor of population medicine at Harvard Medical School, during his keynote speech at the third annual Harvard Catalyst Child Health Symposium held at HMS on Oct. 7.

These revealing findings are among those that turned Gillman from a “skeptic to a convert,” he said, explaining that he is now an avid member of an emerging field called developmental origins of health and disease, which aims to understand how prenatal and early childhood experiences affect an individual’s health later in life and possibly even across generations.

The phrase “You are what your father ate,” shared by Mary-Elizabeth Patti, HMS assistant professor of medicine and an endocrinologist at Joslin Diabetes Center, may sound glib, but her studies of three generations of mice similar to the couch potato rat suggest that these traits do pass from generation to generation, through both fathers and mothers, by virtue of the experiences of previous generations.

The challenge for developmental origins investigators today is how to communicate this new understanding of the importance of child health so that the findings may be applied to shape health care and family policies.

“A very large percentage of the dollars put into health care focus on illness,” said Lee Nadler, Virginia and D. K. Ludwig Professor of Medicine and dean for clinical and translational research at Harvard Medical School, in his introductory remarks.

“But it’s in the wrong place. If we want to improve people’s health, we need to start before disease starts,” he said.

A key concern is that the message about developmental origins of health and disease could be distorted.

Or the fathers, for that matter.

Child health is much more complicated than that, as demonstrated by the range of researchers who contributed their findings to the day’s discussions. Their ranks included doctors specializing in prenatal care, diabetes, neuroscience, and gut health and experts in population health, economics, and public policy.

Research into how experiences during gestation can affect future health included studies of the placenta, presented by David Haig, George Putnam Professor of Organismic and Evolutionary Biology at Harvard University, and Leslie Myatt, professor of obstetrics and gynecology at the University of Texas Health Science Center in San Antonio.

The placenta plays a critical role during pregnancy, “Yet it is usually discarded,” said Myatt. “We need to define the role of the placenta in fetal programming.”

By programming, Myatt was referring to epigenetics, which allows the body to respond to the environment by modifying the use of DNA. Epigenetic instructions can silence genes or turn them down or up.

Baccarelli studies how adverse experiences in utero, such as exposure to air pollution, might lead to epigenetic changes associated with heart disease in later life. His latest findings suggest that an increase in dietary flavonoids, nutrients found in blueberries, citrus, tea and other sources, could protect individuals from this damage.

“It would be really neat if we could change our diet to change our epigenome and change our susceptibility to disease,” he said.

Other talks, such as Patti’s, suggested that adversity in utero could result in negative effects that persist through multiple generations.

Emily Oken, associate professor of population medicine at Harvard Medical School, focused her remarks on exposures to toxins, such as mercury in fish and BPA in cans.

Alessio Fasano, visiting professor of pediatrics at Massachusetts General Hospital and chief of the division of pediatric gastroenterology and nutrition at MassGeneral Hospital for Children, discussed the role of the microbiome—the bacteria that populate the gut and body and regulate many functions—in immune-related disorders, including allergies.

Terrie Inder, the HMS Mary Ellen Avery Professor of Pediatrics in the Field of Newborn Medicine and chair of the Department of Pediatric Newborn Medicine at Brigham and Women’s Hospital, discussed brain development in premature babies. Inder characterized the dramatic brain changes that occur during the last 10 to 15 weeks of the gestation period by imaging the brains of premature babies in a neonatal intensive care unit.

She found that the brains of premature babies don’t grow as well as those of babies born at full term. As a result, they may have lower IQ scores, language deficits or attention problems later in life. Stress is likely a factor, she said, as are sensory isolation and nutrition during this critical period of development.

During panel discussions, one question came up repeatedly: How do we bring these diverse scientific perspectives together? The meeting itself was a step forward.

Driving Changes that Make a Difference

Another central question was, “Now that we have this evidence, what’s the best way to use it to improve health?” Not long ago, the main focus of developmental origins of health science was to deliver the message that the early stages of life are among the most sensitive to adverse and positive influence, so early intervention has value.

According to speaker Jack Shonkoff, the Julius B. Richmond FAMRI Professor of Child Health and Development at the Harvard Chan School, that message has been heard.

Michael Lu, associate administrator of maternal and child health of the U.S. Department of Health and Human Services, substantiated this statement in his talk. He reviewed a range of child health programs under way that suggest that the agency understands the need for early intervention and a wide view.

“If we are going to improve the health of America’s children, we need to do more than health care,” he said. “The challenge doesn’t come with a playbook. We have to learn as we go,” Lu said.

Shonkoff suggested that a shift in thinking is needed.

“We now need to leverage 21st century science to develop new strategies for interventions with testable hypotheses,” he said.

Such work is already underway. For instance, in the realm of prenatal care, Oken investigated ways to communicate to the public the health risks of prenatal and early childhood mercury exposure from seafood.

“We may need a suite of interventions to mix and match to target groups,” said Shonkoff. “We need a measure of who is suffering and who is not, we need a precise understanding of critical periods of development, and we need to dig deeper into variability of vulnerability to understand why interventions work and don’t work.”

Telling pregnant women to avoid fish has drawbacks because fish contain nutrients that are important for development. She found, however, that a carefully worded educational intervention helped women to eat more fish without increasing their mercury intake.

“Our role as researchers is to integrate these perspectives in our interventions,” she said.

But scaling successful pilot interventions to large populations is not simple or straightforward.

“We may need a suite of interventions to mix and match to target groups,” said Shonkoff. “We need a measure of who is suffering and who is not, we need a precise understanding of critical periods of development, and we need to dig deeper into variability of vulnerability to understand why interventions work and don’t work.”

Other speakers included Ross Hammond, director of the Center on Social Dynamics and Policy at Brookings, who reviewed the value of complex systems science in designing and evaluating public health interventions; Charles Nelson III, HMS professor of pediatrics at Boston Children’s Hospital, who described an early intervention in Romania that indicated that placing institutionalized children in high-quality, stable foster care prior to the age of 2 leads to recovery of some cognitive functions; and Caroline Fall, professor of international pediatric epidemiology at the University of Southampton, U.K., who presented her findings about the effects of nutritional restrictions on mothers and babies in rural and urban India.

Harvard Catalyst’s Child Health program is led by a committee of HMS faculty and works to foster the development of programs, resources and strategies that support innovative and collaborative research to improve the health and well-being of children.

The program works across Harvard University, its affiliated institutions and the national Clinical and Translational Science Awards consortium.