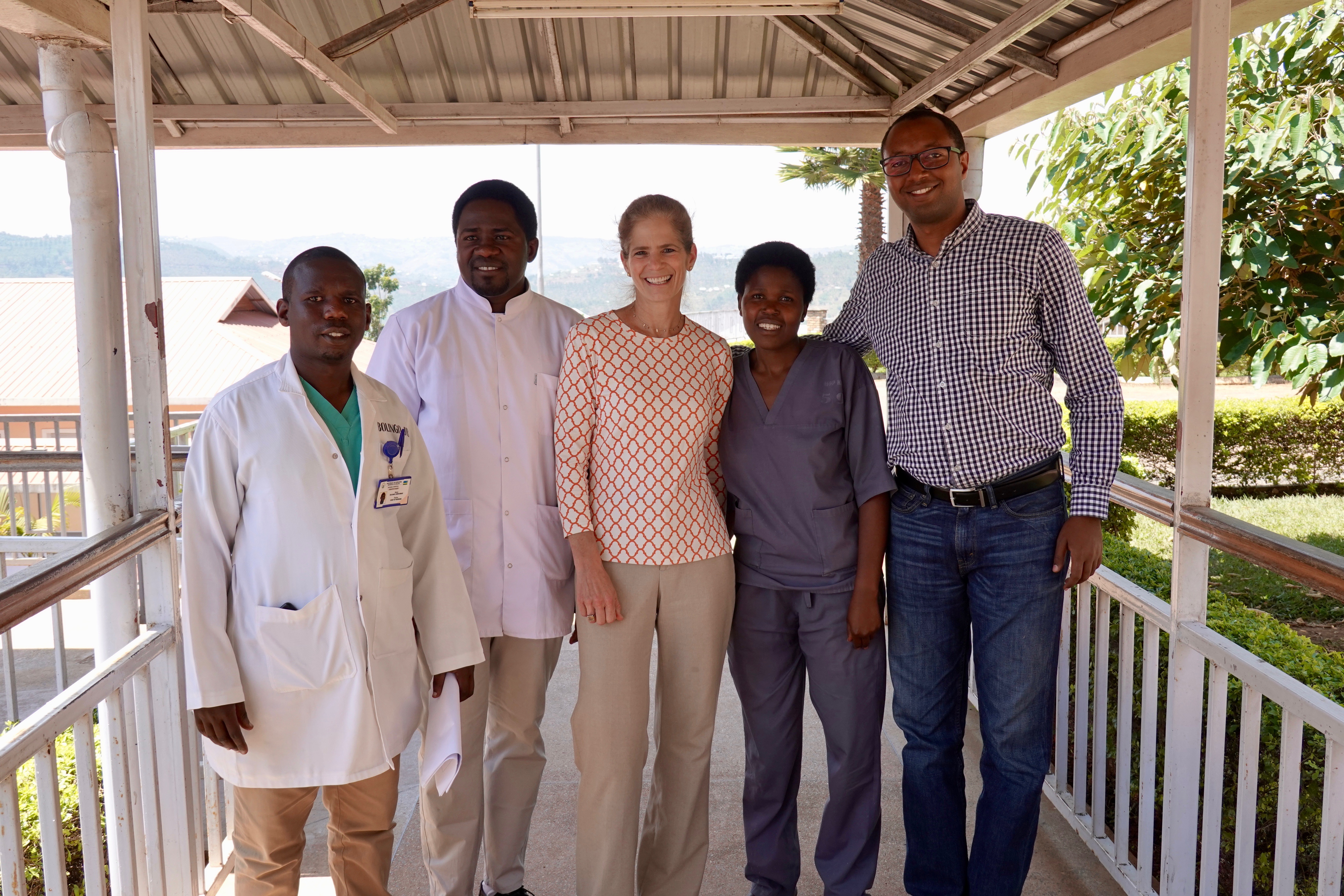 Anne Hansen, MD, MPH, is medical director of the Newborn Intensive Care Unit (NICU) and associate chief of the division of newborn medicine at Boston Children’s Hospital, and an associate professor of pediatrics and an affiliate of the Department of Global Health and Social Medicine at Harvard Medical School (HMS).

You’re the medical director of Boston Children’s NICU, which offers the highest level of newborn care. What inspired you to also do global health?

“It’s always been very important to me to engage in global health work from an equity standpoint.”

We are fortunate that mostly all newborns in the Boston Children’s Hospital NICU survive, unless they are extremely premature or have a devastating congenital anomaly or medical problem. It’s disheartening that preventable deaths are very common in some parts of the world. As a mother of three children, a preventable neonatal death is an unthinkable tragedy.

You’ve been working in Rwanda with Partners In Health and the Rwanda Ministry of Health on creating national standards for newborn care, training health providers, and inventing and testing a non-electric infant warmer. How has newborn care changed there since 2010 when you began?

There’s been enormous change. Rwanda is one of the very, very few Sub-Saharan African countries, if not the only one, that met the 2015 United Nations Millennium Development Goals for newborns. The goal was to reduce the country’s neonatal mortality rate by two-thirds from 1990 to 2015. Rwanda prioritized maternal and child health and succeeded. I hope our work there has contributed.

When we first went to Rwanda, there were no standardized protocols. The doctors and nurses tried to use textbooks or manuals, but those were not at all tailored to their environment. It made it very difficult for them to provide the best possible care. A clinical nurse specialist and I went to Rwanda, where we developed the first version of protocols tailored to local resources for the care of newborns. For example, there’s a protocol for nutritional support of babies, advancing their feedings based on the size of the baby and the baby’s day of life. These protocols and reference tools are laminated and posted on the walls of Rwandan neonatal wards.

The idea for the non-electric infant warmer arose after that first summer in Rwanda, when I was shocked to discover that keeping babies warm was a challenge. Even if the weather is hot, preterm babies can get quite cold because they don’t have the metabolism and fat to retain body heat. But in Rwanda there is not reliable electricity even if their donated incubators worked, which they often didn’t.

When I came home, I decided to find a simple, inexpensive, and non-electric way to keep babies warm so that they could survive and thrive. I reached out to Lawrence Berkeley National Laboratory where their social justice engineers, as I call them, came up with a clever design based on a wax material that, when warmed, stays exactly at skin temperature for six hours. It is heated with hot water that can be prepared either with or without electricity.

We’ve worked very closely with the Rwanda Ministry of Health, Rwanda Pediatric Association, and Partners In Health as we designed and piloted it. It was a huge hit with healthcare providers and mothers. Our promising results of a randomized control trial in 10 rural Rwandan hospitals was recently published in The Lancet.  Next we’ll study its uptake in three other countries where Partners In Health provides neonatal medicine.

“I want to continue to address areas where the care of our complex patients can be improved. We can always do better no matter where we are.”

Any other exciting global initiatives?

I’m really excited about a neonatal consortium that Boston Children’s Hospital is developing with Partners In Health and eight countries where Partners In Health has neonatal programs. We’re calling it 10 for 2030, which represents the 10 of our entities working together to achieve the 2030 sustainable development goal for newborns. The goal is no more than 12 deaths per 1,000 live births.

We meet on Zoom every two weeks and it’s been amazing. We have people from Lesotho talking to people from Sierra Leone, talking to people from Malawi, or Haiti. We discuss the medicines, equipment, and knowledge they need, and projects they’re doing to improve. It’s been so uplifting and encouraging to see them problem-solve with each other, share success and challenges, and use our Rwandan newborn protocols and training materials.

Locally, what research innovation are you most proud of?

The work I’ve been doing here speaks to how far along neonatal care is in a place like Boston. We are a referral center for babies from around the world with an extremely rare condition called long-gap esophageal atresia. It’s a congenital anomaly in which the top and the bottom of the esophagus don’t meet, so a baby cannot eat. It’s surgically very difficult to treat and the current preferred approach is very invasive and requires babies to be mechanically ventilated and heavily sedated, which is not good for their neurological development.

I’ve been collaborating with others to come up with a much less invasive approach that wouldn’t require mechanical ventilation or sedation. We will introduce a device through the mouth to stretch the upper end of the esophagus without needing to use a surgical approach. Though it won’t be able to help every baby with this condition, we’re hoping it will be effective for many.

What do you still want to accomplish?

At Boston Children’s, I want to continue to address areas where the care of our complex patients can be improved. We can always do better no matter where we are. And in low- and middle-income countries, my goal is to get as close as possible to ending preventable deaths of newborns.

I also want to make sure that the babies who do survive, do so with a minimum of complications. I want them to thrive and become happy, healthy children.