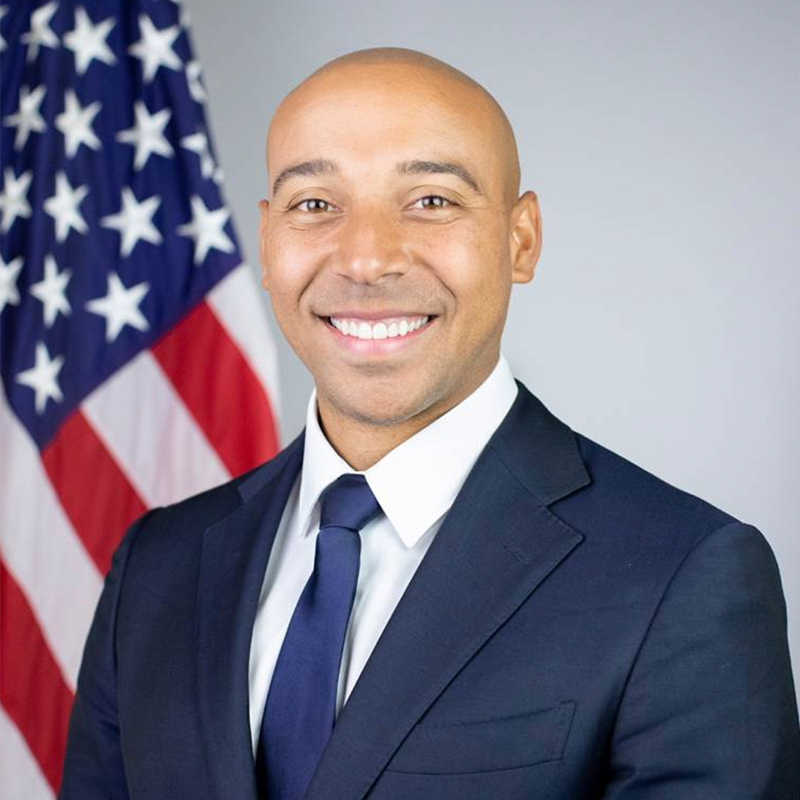 In a Neptune, New Jersey neighborhood just over a decade ago, a teenage Alister Martin found himself in the wrong place at the wrong time, when a gang tried to jump a friend and Martin intervened. He was beaten up badly, and then, thanks to a zero-tolerance policy for gang activity, faced expulsion from high school. Physically and emotionally broken, he was facing the end of the future he had envisioned. Today, against all odds, he is a White House Fellow, working on voting rights with Vice President Kamala Harris and on health equity with the West Wing Office of Public Engagement.

Martin, now an MD, MPP, is an assistant professor in emergency medicine at Harvard Medical School (HMS) and Massachusetts General Hospital (MGH). He works at the intersection of public policy and medicine as research faculty at the Harvard Kennedy School Behavioral Insights Group and clinical faculty at HMS in the Center for Social Justice and Health Equity. As an emergency department physician at MGH, he has seen first-hand the need and opportunity for change-making right there in the ER.

He has led nonpartisan civic-health initiatives to register voters through kiosks in emergency rooms (Vot-ER), to ensure patients with addiction get the recovery treatment they need (Get Waivered), and to vaccinate high-risk communities where they live and work (GOTVax). In addition to his fellowship at the White House, Martin is a 2022-2023 recipient of HMS’s Office for Diversity Inclusion and Community Partnership (DICP) Faculty Fellowship. Harvard Catalyst also offers an annual fellowship through DICP.

We caught up with him by Zoom at his new White House appointment about five months into the fellowship.

Your mother took out a loan to send you away to a tennis academy, partly to get you out of harm’s way. How did that change your trajectory?

I would not be here had I not had an incredible mom and mentors who were able to see a vision of me that I could not see in myself when I was younger. This is the story of what it looks like to have incredible mentors to support you. That’s one of the things that’s been a throughline of my life, even after coming to medical school, and then at the Kennedy School and through residency. I’ve always had folks advocating for me and identifying opportunities to launch me to the next level. This has been a team effort from the beginning.

I had a choice to make that night in high school when a friend was about to be jumped by a group of 10 or 12 guys who were gang-affiliated: Do I stay on the sidelines or do I step in? I was a third-degree Black Belt in Tae Kwon Do at the time and I suppose I foolishly thought I could save the day, so I tried. I didn’t save the day. I got pretty hurt, I wasn’t allowed back in school, and a period followed in which my family was not safe in the community. At the time, I think I would’ve said this was my rock bottom, the worst thing that had ever happened to me. Looking back, I understand it as the event that made me realize I had an opportunity to start over, to dream big, and ask what’s the worst that could happen.

“That was one of the first experiences I had that your biography does not have to determine your destiny. What neighborhood you were raised in and what you’ve been through does not necessarily have to determine how far you can go.”

Being uprooted and shipped off hundreds of miles away to the Bollettieri tennis academy at such a low point in my life – that really transformed me. I wasn’t very good when I entered because tennis and was not very popular in Neptune, but I became good enough to play Division I tennis in college. My college tennis coach, who was my scout in Florida, helped me get my GED and a scholarship to Rutgers. When I got to Rutgers in fall of 2010, it was like, I could have died right there. It was unfathomable to think about where I was almost one year prior to that moment – arms in casts, face wrapped up in gauze, embarrassed to be seen in public for what had been done to me.

That was one of the first experiences I had that your biography does not have to determine your destiny. What neighborhood you were raised in and what you’ve been through does not necessarily have to determine how far you can go. I also learned that a setback can be a setup for a comeback.

How has that past shaped your work as an emergency department physician, civic-health activist, and now as a White House Fellow?

My experience growing up in a low-income community taught me that there is almost no room for error for Black and Brown kids in communities like the one I grew up in. All it takes is one slip and you may not make it.

I’ve learned at least two things. The first is that emergency departments are like the Ellis Island of our healthcare system. Everyone comes through there. In low-income communities, Emergency Departments (ED) are not just about taking care of gunshot wounds and stroke; we also have an opportunity to provide vital primary care to those who need it, first of all. And then we have an opportunity to address these social emergencies, which are the result of upstream health-policy systems failing people. We have a responsibility, I believe, to try to address those issues for the people who have no other options. And we ought to partner with local community-based organizations, when possible, to ensure we do a good job at it.

The concrete manifestation of that are things like Get Waivered, a program I created out of my own frustration with the system when trying to help people with substance use disorders who end up at the ER. How do you help people right then instead of giving them a bunch of phone numbers for rehab facilities that may not even be available to them? Get Waivered helps ED physicians obtain a particular DEA waiver that allows them to prescribe substance use treatments and help EDs institute processes that make it easier for patients to get these treatments. That’s just one example; there are many others.

The second thing I’ve learned is that the federal government is the best way to impact the most people in the greatest number of ways. I can do projects at the individual, regional, and even national level, and I can push and persuade to get them adopted across the country via grass-roots activism, but there is no comparison to what can happen when they are incorporated into federal programs and policies. The scale is enormous.

Your DICP fellowship focuses on Vot-ER, the program you created to register voters right in the ER. How does that work dovetail with your current role in the Office of the Vice President?

Right before the White House fellowship, I was spending my time taking care of patients in the ED at MGH and building out Vot-ER, a nonprofit that works at the intersection of health and nonpartisan civic engagement. We were (and still are, under new leadership) building a network of hospitals, clinics, community care centers, and many thousands of healthcare providers who have signed on to help their patients get access to nonpartisan voter registration where they get their healthcare.

“Emergency departments are like the Ellis Island of our healthcare system. Everyone comes through there.”

What ties the two together is this concept of civic health. The idea is that your physical health is linked to civic representation, including voter turnout. You can look at a map and find districts where voter turnout and voter registration is low, and those correlate to the exact zip codes where health outcomes are low and social vulnerability is high. There is a near one-to-one correlation. People are not getting the resources they need to keep them happy, healthy, and whole.

This is evident right here in Boston and you can see it if you walk through Roxbury, or Mattapan, or Dorchester. If you try to get subspecialty pulmonology care at a clinic in Dorchester, it’s not happening. In other parts of the city of Boston, there are several within a three-block radius.

How do you see this White House role relating to the communities of Roxbury and Dorchester?

For me, if you’re interested in making change, it’s all about building community. The bottom line is that, as organizers, building community is something we need to become really good at, so that when the next crisis happens, we’ve got a network we can activate. This is an incredibly potent opportunity to build a powerful network of folks who are interested in changing the future of our healthcare system and our country at large. For me, it’s also an opportunity to learn how to do both of those things on a large scale.

To really do that, you not only need a community; you also need practice. I got good at tennis by going out and hitting 20,000 forehands, by getting that experience and figuring out what to do better the next time. Here, I get to practice feeling out the levers of change, pulling them, and understanding how the machine works, from this vantage point inside the White House. I think it’s a really important lesson for anyone interested in creating change.

For the rest of my life, I need to be putting myself in positions to put my finger on the scale for folks who don’t have access to the resources that they need, who are often on the outskirts of opportunity in this country. It’s what I would’ve wanted when I was younger, and I hope that will be my legacy by the time I’m finished.

Covid has illuminated health disparities that have always been there. Is that a silver lining?

I think what Covid has done is illuminate the doorway to meaningfully addressing things like health equity, racism, and addressing disparities. Now we have a choice to make: Do we walk through that door or not? And not in just a performative way. Doing so means asking some really tough questions. Have you substantively changed the leadership of your organization to be more representative, if it was not previously? Don’t show me the racial makeup of your entire company; show me the racial makeup of your board of directors. Show me the racial makeup of your C-suite, of the chiefs of departments in your hospital. Have you put the people who have experience addressing issues in equity in positions where they can actually make change rather than giving them ceremonial positions disconnected from influence and power? Have you changed the policies substantively to address inequities?

There are potent opportunities for lessons, and I think every organization at every level has been shown the doorway, and it is their decision to walk through it or not.