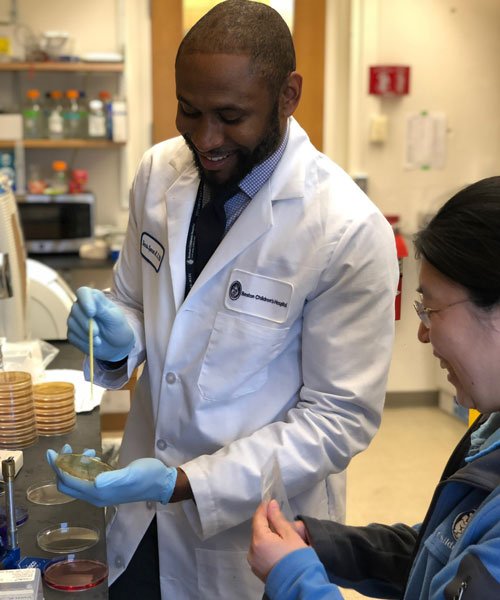 This past year, as a new attending physician in pediatric gastroenterology at Boston Children’s Hospital, Dennis Spencer has been juggling his clinical responsibilities and his clinical research, studies which he hopes “may unearth a new prebiotic that would allow us to bolster the gut’s microbiome and protect those at risk for opportunistic infections.”

It is work Spencer started as a clinical research fellow at Boston Children’s in the laboratory of Seth Rakoff-Nahoum, an HMS assistant professor of pediatrics in the Division of Infectious Diseases at the hospital.

“I thought I might be on the precipice of identifying a dietary approach that could help children who are vulnerable to severe infections from pathogenic bacteria, like C. difficile, which sometimes causes life-threatening diarrhea and inflammation of the colon,” Spencer said.

An example of at-risk children might be those who have had a bone marrow transplant and must remain on antibiotics that can disrupt the balance of bacteria in the gut, possibly leaving it susceptible to new infectious organisms or resistant to future antibiotics.

Spencer explained that research has shown a strong link between diet and gut microbiota and growing evidence of the important metabolic role the microbiome plays in antibiotic resistance or susceptibility.

Commensal bacteria participate in the digestion of food and play a role in pathogen defense.

“This premise, along with the experience gained in the Rakoff-Nahoum lab in commensal bacteria physiology and ecology, set the stage for my exploration into whether dietary glycans may be used to effectively modulate an individual’s gut microbiome and protect it from opportunistic infections,” Spencer said.

But to continue his research as a junior faculty member, Spencer needed to obtain his own funding. However, because he was named a faculty fellow for 2021-23, he will now have two years of clinical research support and mentorship through Harvard Catalyst’s Program for Diversity Inclusion (PFDI).

“This is really exciting because it will allow me protected time in the lab to bring together our exciting preliminary findings into a more complete story,” he said, “both for submitting a manuscript as well as moving a step closer to helping patients.”

Support for junior faculty who have the potential to make a significant difference in patient care and research, advancing toward academic leadership, is why faculty fellowships are so important, explained Joan Reede, HMS dean for diversity and community partnership.

“We see this program as a vehicle to retain these faculty, so they can thrive and achieve their full potential,” she said.

From 2003 to 2020, the HMS Office for Diversity Inclusion and Community Partnership has sponsored 49 fellows. Harvard Catalyst, since its founding in 2009, has supported 14 of those fellows, particularly those focused on careers in translational and clinical research. HMS and the affiliated hospitals co-fund the other fellowships.

“Part of the program is funding, part is mentoring from other faculty, and part is increased visibility and awareness about these talented individuals across the medical school and beyond, which can lead to other opportunities,” Reede said.

According to Reede, about 71 percent of all faculty fellows have remained on the HMS faculty, and of those, as of a year ago, 80 percent had been promoted.

Past fellows include four who have become full professors, nine associate professors, and two chairs or chiefs of departments. Eleven of the 14 fellows who left HMS lead academic departments at other institutions.

“Not only are these talented individuals advancing, they are moving into leadership positions, where they can make a difference,” Reede said.

She pointed to Carlos Estrada Jr., who received one of Harvard Catalyst’s first fellowships in 2009 and is now urologist-in-chief at Boston Children’s, and William Curry, a 2012 awardee, who heads neurosurgical oncology at Massachusetts General Hospital.

Another 2012 awardee, Elsie Taveras, is chief of the Division of General Academic Pediatrics and executive director of the Kraft Center for Community Health at Mass General, and was recently named chief community health equity officer for Mass General Brigham.

Spencer has co-authored articles about the hurdles of a career in academic medicine.
For him, he said the challenges in general have involved questions of mentorship, saying it can be like “gazing into the unknown and not really knowing who to talk to because it’s hard to know what you don’t know.”

“We see this program as a vehicle to retain these faculty, so they can thrive and achieve their full potential.”

“It’s particularly challenging to be a Black man in this space, because there are few individuals with that experience to talk to,” he said.

His fellowship will ease some of the burdens often faced by junior faculty, he said.

“It gives us a cushion of time so we can focus on our research and our careers and not have to immediately apply for more awards,” he said. “Baked right into the program are mentorship and networking opportunities with other individuals who come from diverse backgrounds.”

Spencer also just started an additional role as a faculty advisor for the HMS Office of Recruitment and Multicultural Affairs, in which he will assist with the admissions process and advise historically marginalized students in the Harvard-MIT Health Sciences and Technology program.

“I look forward to talking with these young students about the challenges they may face as minority students in research, where often you’ll be the ‘only lonely’ in the lab or at a meeting,” he said.

“There’s also the way you experience interactions with often well-intentioned individuals that can be disheartening.”

Looking ahead, Spencer said he’s excited to continue to explore questions about gastrointestinal diseases related to the gut microbiome. His future goals also include seeking senior leadership positions where he can apply his experiences in research, student advocacy, diversity, and medical education.

“I’m hoping my experiences will afford me a unique perspective to move medical education to greater equity and ensure that the next generation of clinicians are more culturally competent,” he said.

Spencer added that he aspires to be dean of a medical school someday.

“I always knew I wanted to make a difference, affect the community, and help people,” he said. “I think the ultimate way to do that is by impacting the next generation of doctors.”