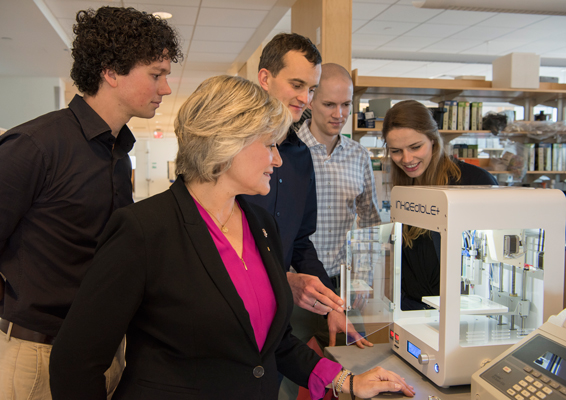 A method to increase prospects of successful births for couples undergoing in vitro fertilization, which currently fails 67 percent of the time.

The possibility that an effective drug treatment can be found for calcific aortic valve disease (CAVD), a heart disease that a quarter of Americans over age 65 develop.

Big ideas like these from eight translational research teams have created excitement on both sides of the Charles River as team members assess their progress one year later. Funded by one-year Harvard Catalyst Reactor grants, the projects focus on advanced microscopic and nanoscale technologies.

From this group of eight pilot projects alone have come several start-up companies, a handful of patent filings, and unexpected new collaborations that have formed across Harvard schools, departments and affiliated hospitals.

From this group of eight pilot projects alone have come several start-up companies, a handful of patent filings, and unexpected new collaborations that have formed across Harvard schools, departments and affiliated hospitals.

“The progress these researchers have made is incredibly energizing,” Guinan said. “Their work is now well on the way to evaluation in patients.”

In 2016, the awards were announced for the initiative, which was entitled “Big Ideas, Small Features.” Reactor provided $50,000 to each team for the year, along with access to and technical assistance for the Harvard Center for Biological Imaging and the Center for Nanoscale Systems at Harvard University.

“Receiving funding from our initiative is different than receiving support directly from the NIH,” Guinan explained. “By providing active, ongoing program management for each project, we help the awardee teams with what it takes to develop and advance their novel and highly speculative ideas.”

Harvard Catalyst receives funding from the National Center for Advancing Translational Sciences at the National Institutes of Health and, through its Reactor Program, develops pilot opportunities and career guidance initiatives to help investigators further their research careers.

The purpose of Reactor is to create fertile ground for innovations that will benefit patients as quickly as possible. Making it easier to collaborate across Harvard is a major focus of the program.

There are approximately 6,000 known genetic diseases and the vast majority have no approved treatment at all, let alone a cure. Finding a way to change this equation is what motivates Marinna Madrid, a doctoral candidate in applied physics at the Harvard John A. Paulson School of Engineering and Applied Sciences.

Madrid cofounded a start-up company called Cellino Biotech to bring to market the means to do this, and the company’s technology is currently under development in the laboratory of Eric Mazur, the Balkanski Professor of Physics and Applied Physics at the Harvard Paulson School.

Their studies showed that the technique has several advantages, including high delivery efficiency and cell viability. And with the invention of the revolutionary gene-editing system CRISPR-Cas9, they have the perfect cargo to modify disease-causing DNA.

Madrid and Mazur used a Harvard Catalyst grant to prove their technique works by delivering CRISPR-Cas9 to induced pluripotent stem cells, which are powerful because they can differentiate into any cell in the body.

They then demonstrated that, in fact, a target protein in these cells can be successfully knocked out. Disabling a gene by knocking it out is a way to see its role in a disease and if it could be a target for treatment.

“By delivering gene-editing tools to cells, we can begin to address the underlying genetic causes of diseases,” Madrid explained. “There’s vast potential.”

But to show the system could work in actual patients, they needed to try it on cells from patients. At one of the regular all-team Harvard Catalyst meetings, Madrid mentioned this need. The team studying the destructive disease affecting one of the heart’s valves, calcific aortic valve disease (CAVD), then offered their cells, which are derived from donated human valve tissue.

The result was a collaboration that took both teams in a new direction, accomplishing something that had never been done before.

The second team—headed by Elena Aikawa, HMS associate professor of medicine and director of the Heart Valve Translational Research Program at Brigham and Women’s—used the grant to develop a novel bioprinted three-dimensional tissue model that is the first to realistically mimic CAVD outside the human body.

With the model, team members can more carefully study the disease process as they work to find the first therapies for this deadly condition.

Aikawa’s co-investigators include Mark Blaser and Florian Schlotter, both HMS research fellows in medicine at Brigham and Women’s, and Casper van der Ven, a doctoral candidate at the University Medical Center Utrecht in the Netherlands.

The team’s 3-D model may someday also serve as a template to engineer a better surgical replacement valve.

The team’s 3-D model may someday also serve as a template to engineer a better surgical replacement valve.

“We were excited about this opportunity to collaborate and were also interested in Dr. Mazur’s method because we want to knock out a protein called sortilin, which we have recently identified as important in the calcification process in blood vessels,” Aikawa said.

“If we can modulate sortilin using CRISPR in cells grown in our bioprinted 3-D model and show reduction of calcification, it would be a very important contribution to the field,” Aikawa said.

Since early 2017, the two groups have done a series of proof-of-concept experiments. In the latest, they demonstrated that the Mazur team’s method can carry a molecule the size of CRISPR-Cas9 into the CAVD cell.

“This had never been done before,” Mazur pointed out. “Our confidence that this will work has gone from being uncertain to being pretty certain that we can accomplish what they want. We are all very excited.”

Next, they’ll try it with the actual CRISPR gene-editing tool.

The research of another team of physicists supported by the Reactor grant has progressed to the point that their method of assessing the quality of embryos for in vitro fertilization (IVF) is ready to be tested using human embryos.

The standard method in IVF is to look at an egg cell or embryo under a microscope for abnormalities, mainly in shape.

“But this is limited information, and there may be an underlying biochemical problem that will reduce the chance of a successful pregnancy,” Sanchez said.

“We think our method is a good tool with the potential to make a huge impact for families, which is what we’re passionate about,” said Sanchez, who is also CEO of an early-stage start-up called LuminOva that arose out of this research.

As a physicist who brings a quantitative approach to cell biology, Sanchez found the exposure to other groups and their helpful suggestions a “rich environment.”

Now, one of the other teams wants to collaborate. A group headed by Jonathan Whetstine, HMS associate professor of medicine and an investigator at Massachusetts General Hospital’s Center for Cancer Research, would like to use Sanchez’s method to assess the metabolism of cancer cell lines with which they work. Whetstine’s team ultimately aims to find a way to block drug resistance to cancer treatment.

Aikawa’s group has also started a new collaboration with Whetstine’s group, tapping their expertise on cancer epigenetics to look at the epigenetics of CAVD.

These eight pilot projects are diverse, Guinan pointed out. They also include the development of a rapid test using inkjet technology to identify treatment for bacterial pathogens, including those that are multi-drug resistant, and a new technology to improve magnetic stimulation devices, which could be the pacemakers and brain stimulators of the future.

“We found that the teams all helped each other problem-solve, and they weren’t competing,” said Guinan.

“It shows,” said Mazur, “how problems that were intractable before can be solved if you put the right people together and collaborate.”