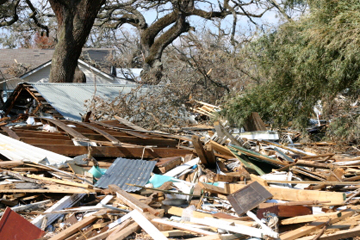 When natural disasters unleash horrific damage and generate mass casualties, the psychological impact on survivors typically includes posttraumatic stress disorder (PTSD), with symptoms that can range from mild and transitory to long-term duress.

Each year, 500 events throughout the world meet the Red Cross definition of ‘disaster,’ with one-fifth to one-third of survivors experiencing PTSD. Women, African-Americans, and other low-come populations are twice as likely than whites, males, and those with higher income to suffer from this condition.

While posttraumatic stress is expected after natural disasters, few survivors anticipate the positive psychological changes that they may experience – and now new research has revealed that genes may play a role.

Recent studies have shown that 50 percent of survivors of natural disasters experience PTG, with a greater prevalence among older adults, non-Hispanic blacks, and those exposed to additional stressors.

A new study published this fall in Journal of Affective Disorders by researchers at Harvard Medical School, Harvard University, Massachusetts General Hospital, The Broad Institute, Columbia University, and University of Massachusetts Boston has found a link between a variant in the gene RGS2 and PTG.

“Most genetic association studies examine genes as predictors of the onset or course of diseases. We tried to extend this work by examining genetic variation associated with both mental health conditions, as well resilience in the face of trauma,” said Erin C. Dunn, postdoctoral research fellow at the Center for Human Genetic Research at Massachusetts General Hospital and lead author on the study.

Dunn and colleagues examined whether 10 common variants in seven genes known to correlate to psychiatric phenotypes were involved in shaping responses to Hurricane Katrina. Using data from an ongoing prospective study of over 1,000 low-income non-Hispanic black parents who resided in New Orleans prior to Katrina, they found that overall, hurricane survivors with higher levels of exposure reported more symptoms of PTSD, but did not differ in their level of PTG. They also found a significant gene-environment interaction: both genetic variation and level of exposure were predictors of PTG in survivors.

“Our findings suggest that genes previously shown to play a role in psychiatric disorders may also be important in understanding more positive outcomes, including post-traumatic growth, following exposure to traumatic stressors,” said Dunn.

While prior studies have implicated the gene RGS2 in several anxiety disorders, results have been inconsistent.

“Our findings suggest that genes previously shown to play a role in psychiatric disorders may also be important in understanding more positive outcomes, including post-traumatic growth, following exposure to traumatic stressors,” said Dunn.

The study was supported by a pilot grant from Harvard Catalyst | The Harvard Clinical and Translational Science Center, which among several other resources, offers Harvard researchers pilot funding opportunities throughout the year.