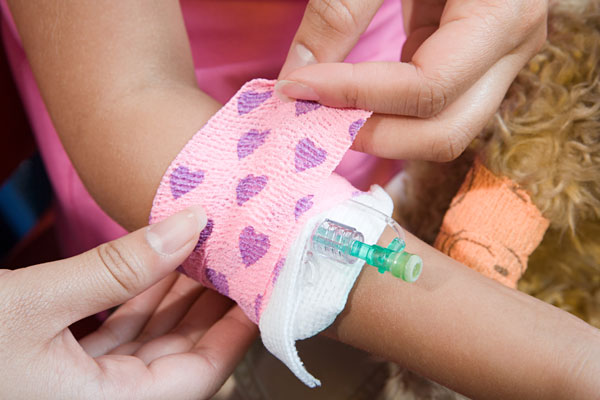 About two years ago, Lee Nadler got a phone call from a colleague. Her grandson had a brain tumor and was a match for a drug approved for adults. The drug hadn’t been studied in children and her efforts to get it for the child had failed.

Nadler, dean for clinical and translational research at Harvard Medical School, made some calls and found a path forward. The boy has been in remission ever since.

“We need to work collaboratively to find and test therapies that work for children,” Nadler said.

The symposium at the Joseph B. Martin Conference Center at HMS, brought together speakers from industry, regulatory organizations and hospitals to explore the challenges of designing and running pediatric clinical trials.

“If industry, institutes and foundations work together, we can change the world,” said Nadler.

Speakers shared success stories and emerging ideas for closing the gap between adult and pediatric clinical research. Key elements for success include developing information technology to give researchers the data they need to find patients and evaluate therapies; forming networks of investigators that include clinical collaborators from multiple hospitals as well as partners from industry, government and private foundations; and engaging communities that support children and young adults.

“If industry, institutes and foundations work together, we can change the world,” said Nadler.

Of the 200,000 or so current, ongoing clinical trials that are testing new interventions for disease, 18 percent involve children ages 0 to 17. But youth make up about 25 percent of the world’s population and, according to the 2015 Global Burden of Disease report from the Institute of Health Metrics and Evaluation, 30 percent of life years lost to disease are among children.

“From a population or disease burden perspective, 18 percent [involved in clinical trials] is too low,” said symposium co-chair Christopher Duggan, HMS professor of pediatrics and director of the Nutrition Center at Boston Children’s Hospital.

Many drugs are either never tested in children or are tested much later in small groups—sometimes in the single digits—and for short durations, according to Duggan. As a result, doctors resort to giving children drugs that have not been tested or approved for use in young people.

According to a BMJ study published in 2000, two-thirds of children surveyed received off-label drugs, and those drugs resulted in 50 percent more adverse events than licensed drugs, suggesting that off-label use of drugs in children comes with risks.

Drug studies in adults don’t automatically translate to children. Early on, children’s bodies are dominated by organ tissue, so they process drugs differently than adults. Body composition changes over time, so children will respond differently to interventions at different ages.

Even in cases where drugs have been tested in children and approved, the studies are small and short.

For instance, trials conducted to approve 20 different drugs for attention deficit disorder only observed, on average, 75 children over an average of 4 weeks, according to a 2014 study in PLOS One by speaker Kenneth Mandl, HMS professor of pediatrics at Boston Children’s.

“There is a difference between the actual evidence base and what parents and pediatricians might think,” said Mandl, who is also director of the Computational Health Informatics Program at Boston Children’s.

Pediatric clinical trials face all the challenges of adult trials and then some. Many pediatric diseases are rare, affecting small numbers of patients. Further, children are a vulnerable population, so regulators impose more stringent controls on risk management.

As a result, scientifically valuable procedures, such as biopsies and interventions to support infusion of placebos, are harder to include when designing a trial for children. Further, local laws affect consent procedures.

Efforts to streamline the institutional review board process while keeping trials safe have made trial design smoother. For instance, SMART IRB, a platform for unifying the multisite trial review process that is funded by the NIH and led by Harvard Catalyst and the clinical and translational science institutes at the University of Wisconsin-Madison and Dartmouth College, is now used by 64 centers and over 166 institutions.

But, said Kornetsky, “local context needs to be considered while researchers are building their protocols.”

Several speakers shared success stories that suggest ways to move beyond these challenges and speed safe and effective pediatric drugs to the clinic.

Mandl, for instance, described IT systems such as i2b2 (Informatics for Integrating Biology and the Bedside), which can help investigators identify rare patients who might qualify for and benefit from participating in a trial.

“This kind of technology for interoperability is used in every other industry automatically, and obviously,” Mandl said.

The development of research networks is also a priority, according to several speakers. Bonnie Ramsey, director of the Center for Clinical and Translational Research at Seattle Children’s Research Institute, described the Cystic Fibrosis Therapeutics Development Network, a nonprofit developed in 1998 that brought together industry, science and philanthropy to discover, develop and test drugs for the disease.

The network’s efforts led to the approval of two drugs for children with Cystic Fibrosis.

“CF was a disease that hadn’t budged for 30 years,” said Nadler. “If we make a commitment to do things like this, we can do more.”

Several speakers discussed the value of disease agnostic networks for efficiency. Further, the NIH has launched a program to develop a national laboratory network, the Trial Innovation Network, according to speaker Mary Purucker, a medical officer in the Division of Clinical Innovation at the NIH.

“Our goal is to build network capacity to streamline processes and enhance quality and efficiency,” Purucker said.

A decade of engagement has made it possible for Phipatanakul to do ongoing research in schools to study interventions designed to improve school environments and potentially reduce asthma in children.

Taveras, who studies childhood obesity, has engaged with children and families who have had success with weight management to understand the factors that contribute to success and also to understand obesity more broadly.

“Our interventions for problems like obesity and substance abuse are not working,” said Taveras. “We need to get out of our comfort zone and see the problem in context.”

Community engagement is a priority for Harvard Catalyst, which has developed a Population Health Research program and other efforts to help researchers connect with communities, which may be families, schools, populations determined by geographic regions, or people defined by identity or health-related concerns.

“Sometimes to move forward, you have to break out of the box and engage with the community,” said symposium co-chair P. Ellen Grant, HMS professor of radiology and director of Fetal-Neonatal Neuroimaging and Developmental Science Center at Boston Children’s.

Other speakers included David A. Williams, the HMS Leland Fikes Professor of Pediatrics and senior vice president and chief scientific officer at Boston Children’s; Robert “Skip” Nelson, deputy director and senior pediatric ethicist at the U.S. Food and Drug Administration; Bruce Gordon, a pediatric hematologist/oncologist at the University of Nebraska Medical Center; Ronald Kleinman, the HMS Charles Wilder Professor of Pediatrics and head of the Department of Pediatrics at Mass General; Gary Fleisher, the HMS Egan Family Foundation Professor of Pediatrics and physician-in-chief and pediatrician-in-chief at Boston Children’s; James Heubi, director of the Center for Clinical and Translational Science and Training at the University of Cincinnati; and Charles Thompson, global lead at the Pfizer Pediatric Center of Excellence and founder of the International Children’s Advisory Network.