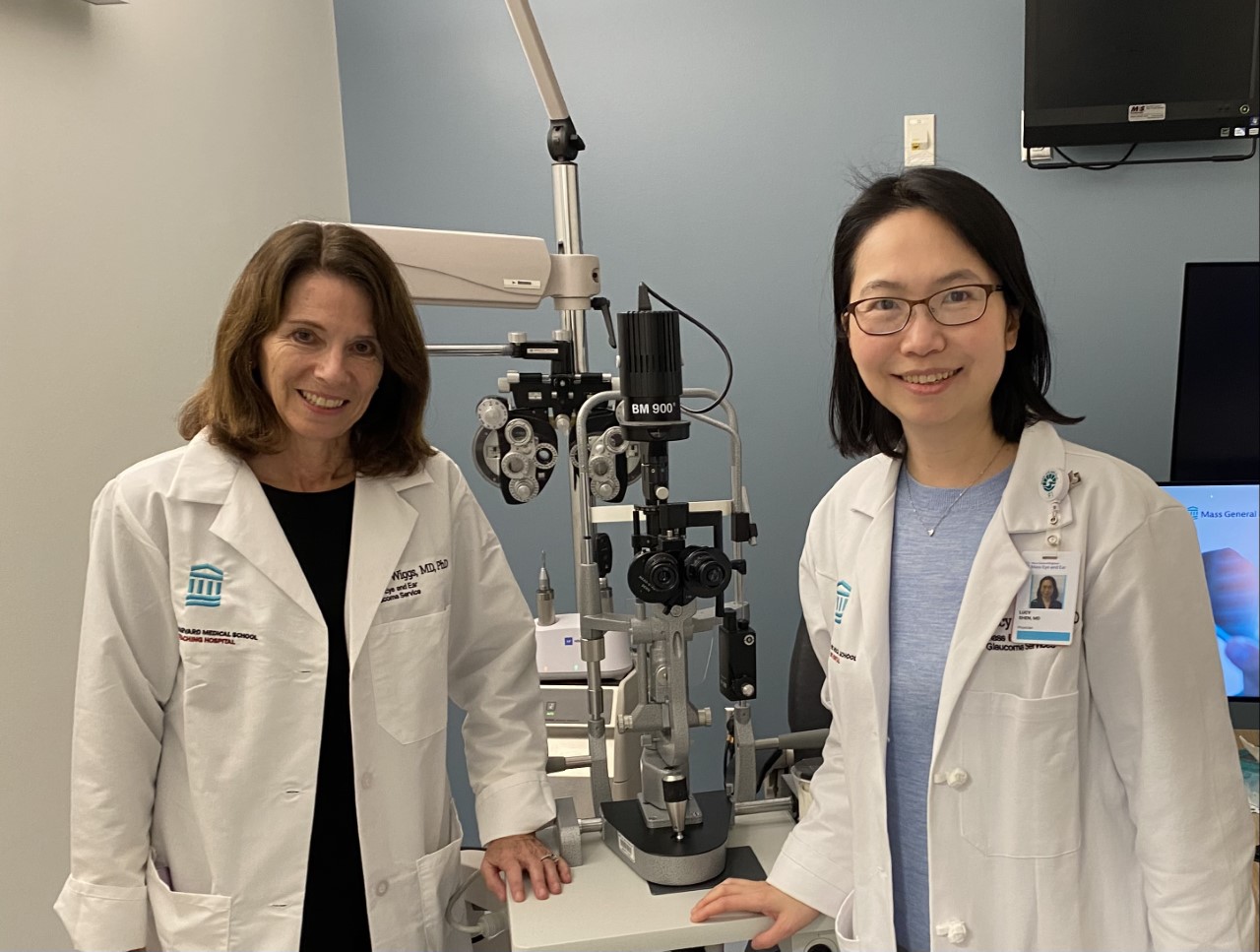 Lucy Qing Shen, MD, and Janey Lee Wiggs, MD, PhD, first met more than 10 years ago, when Shen was seeking a position at Massachusetts Eye and Ear (MEE) and Wiggs was one of her interviewers. Both had been working on pieces of the same problem–glaucoma–and they had impressed each other (Shen got the job). A decade later, catalyzed into collaboration by our Five Senses: Input and Response funding opportunity, they are teaming up to parse the subtypes of glaucoma based on Shen’s imaging data and Wiggs’ genetic findings. It’s a crucial first step in developing better diagnostics and treatments for the substantial portion of people with glaucoma who don’t respond to current therapies.

What is the essential problem that this project seeks to solve?

LQS: We’re trying to understand glaucoma beyond our current knowledge so that therapy can be more precise. We know glaucoma is a disease of the optic nerve, but we’re still trying to understand what causes it. Current treatments target intraocular pressure; however, multiple lines of evidence suggest there are other causes as well, including microvasculature abnormalities. Using high-resolution imaging to analyze blood flow, we previously found a correlation between lack of blood flow in the optic nerve and in the nailbed capillaries of glaucoma patients’ fingernails, suggesting a systemic cause.

This was happening in parallel with Janey’s work on identifying genetic risk factors for primary glaucoma. So we thought, why not take this a step further and determine which genetic factors correlate with these clinical attributes?

JLW: There are likely to be multiple different paths to end-stage disease in glaucoma. We know from Lucy’s work and others that some people with glaucoma have abnormal blood flow related to disease development. We also know that some of the genes we have found that contribute to glaucoma risk are involved in blood flow. So a natural collaboration developed to do this genotype-phenotype correlation — to analyze whether the people who have glaucoma with impaired blood flow also have these genetic risk factors.

“We need to identify people at risk for disease early enough so that we can intervene appropriately before irreversible damage is done.”

Why does this kind of genotype-to-phenotype matching matter to patient care?

LQS: I see many of these patients clinically, and their glaucoma is the hardest to treat. They don’t typically present with high intraocular pressure, and since all the therapies we currently have act by reducing intraocular pressure, we know these patients are unlikely to be helped. We often see their visual function worsen even when the intraocular pressure is well controlled. But we have very little to offer them. It’s a challenging clinical problem. Hopefully, by identifying and confirming that these genes are associated with the vascular phenotypes we see in the clinic, we will discover better treatment options.

JLW: Our goal in taking care of glaucoma patients is to stop the disease or at least to slow it down. There’s nothing we can do to restore function once it’s gone. We need to identify people at risk for disease early enough so that we can intervene appropriately before irreversible damage is done. Currently, neither imaging nor genotyping alone is sufficient for that, but combining the two may identify people at pre-symptomatic stages when treatment might have greater success.

If your study is successful, how might it change clinical practice?

JLW: One thing I envision is a precision-medicine approach to glaucoma based on this work. Imaging is really too expensive to use broadly as a diagnostic tool, but genotyping is increasingly being used. For example, direct-to-consumer genomics companies such as 23andMe are now offering tests for glaucoma. This may be premature given the early state of the science, but it demonstrates what is possible.

The idea would be to analyze an individual’s genotype to identify any variants that we know are related to blood-flow problems. People with risk variants would then undergo imaging tests based on Lucy’s findings. Those with blood-flow abnormalities in combination with genetic risk could be followed to ensure early identification of any optic nerve damage and could potentially be candidates for investigational therapies directed at improving blood flow.

What is the value of pilot funding for a project like this?

LQS: I started my career at MEE with a Harvard Catalyst grant in collaboration with a radiologist on imaging. It was my first grant here, and really how I started doing the work on glaucoma imaging. A decade later, I have access to other funding mechanisms, but very few options existed when I started as a young faculty member. It was extremely helpful to have that first pilot grant. The fact that I’m still here is a good example of how this type of grant helps grow faculty careers.

The framework that this grant sets in place has been really important as well to ignite and flush out new ideas. We have monthly meetings to discuss logistics and make sure we’re all on the same page, and these collaborations have already fostered additional innovative ideas. We just had an abstract accepted at a national meeting based on one idea Janey proposed, to examine how microvascular disease may manifest differently in each eye in the same patient. Those personal aspects are critical.

“It’s a really exciting time for our field to begin to carry out this kind of multidisciplinary research. People have been largely siloed in their fields, and this provides an opportunity to collaborate across disciplines.”

JLW: To get NIH funding, which is always the goal, there has to be preliminary data that supports the concept and the hypothesis, so this kind of pilot project is absolutely critical in generating the data. If our results support the hypothesis that a subgroup of patients have glaucoma because of this blood-flow issue, and we can identify them through this genetic test, that opens opportunities to further investigate this on a larger scale and to test therapies.

It’s a really exciting time for our field to begin to carry out this kind of multidisciplinary research. People have been largely siloed in their fields, and this provides an opportunity to collaborate across disciplines. Collaboration brings more power to these analyses and fosters the development of novel methods to diagnose and treat these patients. The key is to obtain funding to get started.

How does this collaboration fit into the other work of your labs?

JLW: As a relatively common disease with complex inheritance, glaucoma perfectly illustrates one of the challenges we have in post-GWAS research across disciplines. The goal of the genome-wide association study is to identify the various genes that contribute to a given condition, and there can be hundreds of genes that participate in many different biological pathways underlying  these complex disorders.

So the next step after a GWAS is really critical.  It’s critical to understand how the disease-associated genes define the pathways and different mechanisms that contribute to disease.  Blood-flow abnormalities is an important pathway that we’re interested in. By combining our knowledge of genetics with Lucy’s background in imaging, we can begin to do that.

LQS: When Janey interviewed me in 2009, I was very impressed with her work. Even though my research interest lies outside of genetics, I’ve wanted to work with her for a long time. We just hadn’t had an opportunity to do so. When my imaging work revealed these microvascular abnormalities, the genetic component became more relevant, so I approached Janey. She and I were already talking about how to set this up when the Harvard Catalyst grant application came out. It literally was the catalyst that brought the two of us together. We both felt it was the right time for this collaboration.