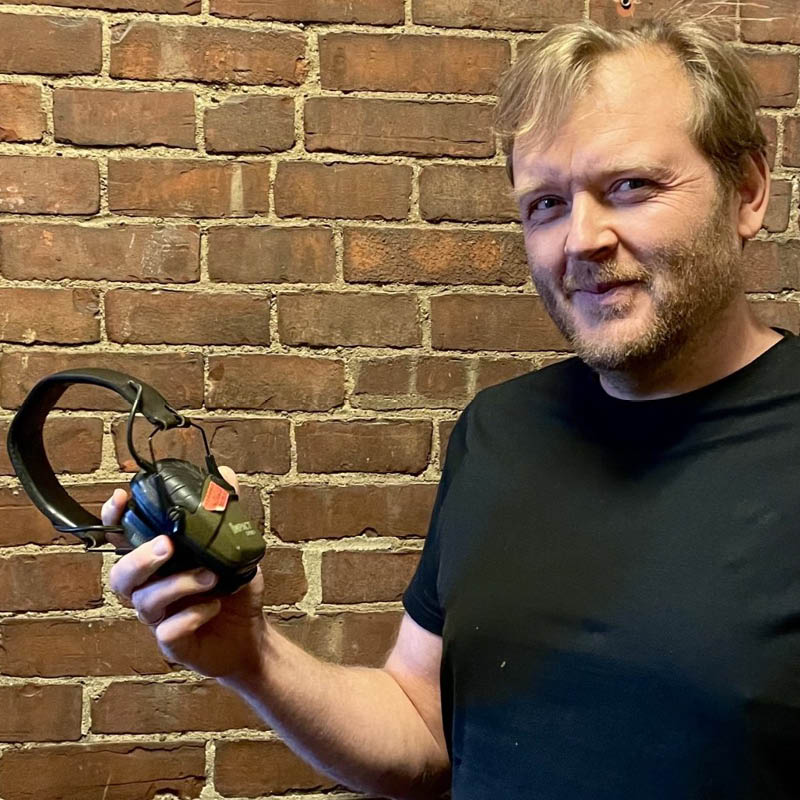 Clas Linnman, PhD, studies neuropathic pain in spinal cord injury, not tinnitus. Yet his idea for treating tinnitus with a novel, simple headphone device that flips incoming sounds to the opposite ear may just be an answer for people experiencing this ubiquitous and sometimes debilitating condition. Linnman, assistant professor of physical medicine and rehabilitation at Spaulding Rehabilitation Hospital, received pilot funding through our Five Senses: Input and Response program to take his invention to the next level with a placebo-controlled feasibility trial.

We caught up with him just before he headed to Paris for a rendezvous with his wife and kids, who are living there during his wife’s sabbatical.

You’ve described this experimental treatment as a kind of auditory counterpart to mirror therapy, which is used to treat phantom limb pain in amputees by tricking the brain into perceiving the amputated limb as still there. How did you come to apply this concept to treat tinnitus?

I was at a seminar exploring potential similarities between tinnitus and pain, and I had the idea that if mirror therapy works for phantom limb pain, could we do that in tinnitus?

Mirror therapy takes advantage of the brain’s capacity as a predictive coding machine that is constantly trying to predict our environment and make sense of whatever sensory information flows in. Damaged nerves can create “noise” along nerve fibers that the brain might perceive as pain, and one way to make sense of that is to visualize that the limb is still there, even though you know it’s not. That syncs with a more basic perceptual interpretation of the signal the brain gets — it fits the world better than the idea that the limb is gone and it gives you a chance to integrate the visual feedback and reinterpret those signals. Then you can readjust your model of the world accordingly.

“We’ve developed a simple headphone that rewires the sound coming into one earphone over to the other and vice versa. Using this ‘auditory mirror,’ we completely flip sounds.”

You can think of tinnitus as phantom sound the same way as phantom pain: there’s no external source of the signal. It’s generated, we think, somewhere along the pathway from your cochlea to your brain’s auditory cortex. Our idea is to kind of mess up the brain’s integration between vision and sound, so that you see something on one side, but you hear it on the other. The hope is that introducing such a big error into the system can help reinterpret those phantom noises from the cochlear pathway so you cease interpreting them as actual sound.

What does that therapy look like for treating tinnitus?

We’ve developed a simple headphone that rewires the sound coming into one earphone over to the other and vice versa. Using this “auditory mirror,” we completely flip sounds. When you wear the headphones, you get visual stimuli normally, so you might see someone talking on your left side, but the sound of their voice would be heard as if they were on your right side. By flipping sound this way, we essentially teach the brain that sound localization is not reliable in this situation so it will rely instead on vision.

Humans are visually oriented — our vision is much more precise than our hearing, so if the sound is not perfectly synched with the vision, we trust our vision. Think about a ventriloquist with a puppet. We hear that the sound is originating from the ventriloquist, but his lips are silent, and the puppet is the one talking, so we reinterpret the world and hear the sound as if it’s coming from the puppet. It doesn’t require a cognitive effort, because we’re so good at using the best sense we have. The headphones really force you to disregard your sound localization. The idea is that this disruption can, like in mirror box therapy, help readjust the brains model of the world.

Your earlier results suggest a dose-response effect of wearing these headphones – the longer they were worn, the greater the reduction in tinnitus. What do we know about how this device works?

We don’t know that much. In a pilot study we conducted with 20 people, the main result was that both awareness of tinnitus and tinnitus-related handicap were significantly reduced, but we don’t know why. It could be an attention mechanism or it could be a placebo effect, as we did not have a placebo control in that study. That’s where the Harvard Catalyst grant comes in.

I’m a skeptic. Because you have to be. Many claims have been made about products that purportedly treat or even cure tinnitus and many patients have been disappointed over the years, so we want to be careful not to make any broad claims. That said, our preliminary results showed a nice correlation between the length of time participants wore the device and reduction in tinnitus handicap.

The Department of Defense, for one, is interested in this therapy, but would like more data. How will this pilot funding help to make this available to those who are most in need?

Most important is the rigorous controlled study we are conducting to see if it works better than the placebo. We will conduct a larger study with more participants using an active device and compare results with a passive device that doesn’t flip the sound inputs, which will serve as placebo. Once we have those results, we can be more confident about how this works.

“Very few if any of the devices being marketed for tinnitus were studied in comparison to placebo, and currently no device or drug treatment is FDA-approved for tinnitus.”

Most people who have tinnitus also have reduced hearing, typically in the same frequency range of the tinnitus, so we’ll gather data to understand that link and whether improving tinnitus can also improve hearing. Each study participant gets a tablet, and does their own audiometry and tinnitus ratings. We hope to get much more detailed longitudinal information on how tinnitus symptoms may change over time with the device.

It’s simple enough to implement this device as an app on wireless earbuds, so that might be the quickest route to commercializing this. Some people say, “Just sell it or just build it,” but I think if we can show that it works and that it works better than placebo, then we can get behind it. Very few if any of the devices being marketed for tinnitus were studied in comparison to placebo, and currently no device or drug treatment is FDA-approved for tinnitus.

This isn’t your primary area of research. What’s driving your interest in this work?

No it’s not. My primary area is imaging of neuropathic pain, specifically in spinal cord injury patients. That’s my day job. This started as a neat idea and then we saw these positive results. There are 30 million people suffering from tinnitus in the US alone. It’s the number one disability claim for veterans — hearing loss is second — so it’s a massive burden on veterans.

People can be suicidal because of tinnitus. If you have it really bad, you can’t sleep and you can’t function. It’s not “just” ringing in the ears. It’s a real issue for many people and we’re hopeful that we can help some of them.  If this could help one in 10 people with tinnitus, then I would sleep very well at night.