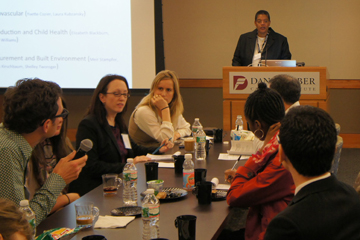 Exactly how much does stress really contribute to disparities in disease and premature mortality, and specifically, what is its role in cancer and cardiovascular disease?

To arrive at some answers, and encourage collaboration on transdisciplinary approaches to studying stress, Harvard Catalyst’s Health Disparities Research Program sponsored a two-day symposium in October.

Twenty-five national and international speakers, including a Nobel laureate, presented at the symposium, which was entitled “Stress and Health Disparities: Bridging Laboratory, Clinical, and Population Scientific Approaches.”

Psychosocial stress arising from low socioeconomic status and discrimination is a powerful mediator of disease and one that holds across gender, culture, and racial differences, said Michelle Williams, Stephen B. Kay Family Professor of Public Health and chair of the Department of Epidemiology at the Harvard School of Public Health (HSPH).

Williams, also director of the Harvard Catalyst Health Disparities Research Program, who opened the conference along with Julio Frenk, dean of Harvard School of Public Health and the T & G Angelopoulos Professor of Public Health and International Development, said researchers are still studying the ways in which stress contributes to health disparities.

Keynote speaker Elizabeth Blackburn, of the University of California, San Francisco, one of three Nobel Prize winners in Physiology or Medicine awarded in 2009 for the discovery of how chromosomes are protected by telomeres and the enzyme telomerase (telomeres are the protective caps on the ends of chromosomes that are a measure of cell age) presented her research on the role of telomeres in stress.

Blackburn illustrated how chronic psychosocial stress can lead to shorter telomeres, causing cells to stop replicating and cell genomes to become unstable. Lower educational attainment and neighborhood deprivation are also associated with shorter telomeres, and maternal stress during pregnancy has been known to result in shorter newborn telomeres.

“Telomere attrition is a stress-related and valuable, powerful biomarker, and at least a partial contributor to aging-related diseases,” Blackburn said.

“Telomere attrition is a stress-related and valuable, powerful biomarker, and at least a partial contributor to aging-related diseases,” Blackburn said.

Focusing on the neurodevelopmental consequences of early adversity in childhood, the second day’s keynote speaker, Charles A. Nelson III, HMS professor of pediatrics and director of research at the Division of Developmental Medicine, and Richard David Scott chair in Pediatric Developmental Medicine Research at Boston Children’s Hospital, noted that complete recovery from early toxic stress is rare, and that earlier interventions better address sensitive periods of development during which patients may be most susceptible to toxic stress.

Other speakers explored the risks associated with stress for cancer and cardiovascular disease. In her concluding remarks, Williams championed a call to action, outlining a path forward that could integrate laboratory, clinical and population scientific approaches.

As a result of the success of this symposium, Harvard Catalyst will offer pilot funding opportunities to researchers who can propose novel, interdisciplinary solutions to the complex problems stress can produce.

“The study of stress is a legitimate, cross-cutting area for human health and to address health disparities. This symposium is a continuation of a discussion we’ve been having for many years, even decades, and we look forward to advancing this important area in newly-formed working groups,” Williams said.

The Health Disparities Research Program is one of several initiatives supported by Harvard Catalyst, the Harvard University’s clinical and translational science center, which is funded by the NIH and Harvard-affiliated institutions.

The program works across Harvard schools and throughout its affiliated hospitals to promote new collaborative research, education and training opportunities to study disparities in health and health care.