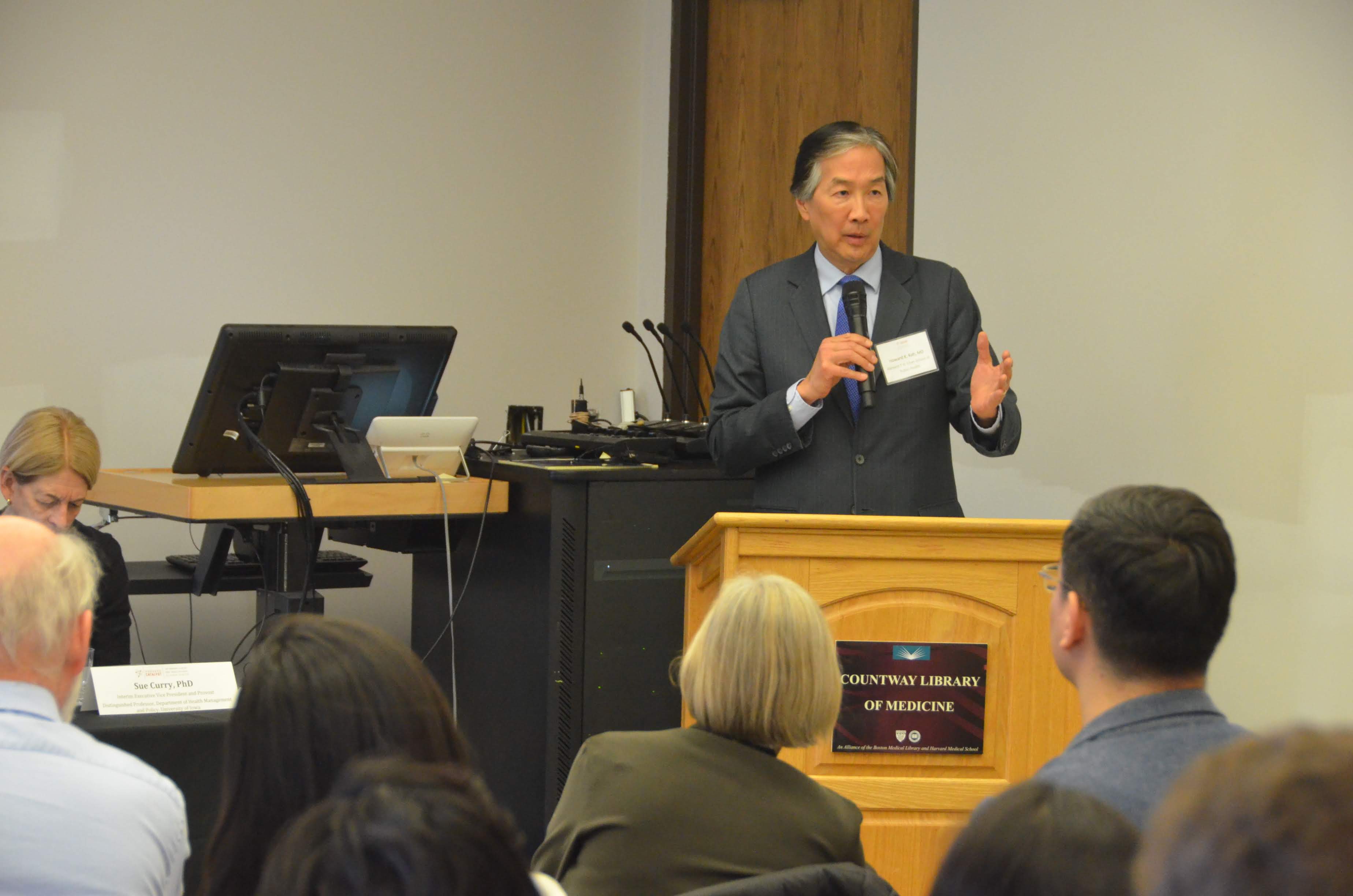 Former assistant secretary for health of the U.S. Department of Health and Human Services, Howard K. Koh, MD, MPH, issued a challenge to participants at a recent Harvard Catalyst Community Engagement forum on how to best translate research evidence into effective policy changes. “There is no issue more pressing than this one,” emphasized Koh, now the Harvey V. Fineberg Professor of the Practice of Public Health Leadership at the Harvard T.H. Chan School of Public Health.

“Here we are in the heart of academia surrounded by researchers of all kinds, but in terms of translating their work into policies that affect all our communities, we are not doing our job,” he said. Koh, also a former Massachusetts commissioner of public health, has been integral to federal and state efforts to reduce tobacco use and cancer treatment disparities affecting underserved and minority populations.

The Harvard Catalyst Community Engagement Program, which sponsored the forum held Feb. 5 in Countway Library, aims to accelerate the pace of adoption of evidence-based programs and policies to promote health and eliminate disparities.

“Here we are in the heart of academia surrounded by researchers of all kinds, but in terms of translating their work into policies that affect all our communities, we are not doing our job.”

Sometimes getting evidence into policy happens because of legislation, said Sue Curry, PhD, interim vice president and provost of the University of Iowa and chair of the U.S. Preventive Services Task Force (USPSTF). USPSTF is an independent panel of national experts who synthesize available evidence into practice recommendations about preventive services such as screening tests, counseling, and medications. They grade each recommendation based largely on the strength of the evidence.

As part of the Affordable Care Act, health insurers must cover recommended preventive services with an A or B grade. “Suddenly what we say makes a difference,” Curry said.

She advised, “If you want to get research evidence into practice, you must get practice into evidence.” Her other suggestions: Partner with settings where you want to put an intervention into practice. Design a strategy for disseminating evidence-based information so it reaches the intended audiences.

Michael Curry, Esq., JD, has spent considerable time developing trust and making connections with legislators in his 20 years of policy work. “Legislators are inundated with information and don’t have expertise in all areas,” said Curry, who is now senior vice president and general counsel at the Mass League of Community Health Centers. He previously worked at Blue Cross and Blue Shield of Massachusetts and was actively involved in state healthcare reform.

“We have to come in with reliable data and compelling arguments about why what we’re presenting is important,” he said. “But you also need to have a personal story about what it means to families, their constituents.”

Carlene Pavlos, MTS, executive director of the Mass Public Health Association (MPHA), said MPHA’s goals are to eliminate health inequities and create healthy communities, through shaping policy and budget advocacy. She pointed out that most available evidence is focused on the health of the individual, whereas they are interested in changing the health of a population — communities. They need evidence on how to shape these changes, and ways to measure progress and possible long-term outcomes.

“Get more creative and think of new strategies to do this,” she suggested. “Have the people affected be part of research design, data analysis, and advocacy to together achieve our goals.”

Eric Rimm, ScD, professor of nutrition and epidemiology at Harvard Chan School, pointed out how long it takes to go from the science to implementation. Through research in his laboratory in the 1970s and ‘80s, he and colleagues found that trans fats were “bad” and published their studies in all the best journals.

“We thought the policy people would take it from there,” he said. “But we had to advocate for changes.”

First, food labels were required to list the amount of trans fats, resulting in a 50 percent drop in intake of trans fats, he said. As of 2018, trans fats are banned. “But it took 50 years,” he said.

From the audience, HMS Dean for Clinical and Translational Research and principal investigator of Harvard Catalyst Lee Nadler, MD, said he was troubled that change takes 50 years. “How do we marshal the ability to communicate to make change happen more quickly?” he asked

Rimm told of how he recently and unintentionally fell into a great way to communicate a public health study. Quoted in a New York Times article, he referred to potatoes as “starch bombs” and suggested “a side dish of just six fries.” Those quotes went viral.

“I think we woke people up a bit,” he said. “I’ve never reached a million people before.”

To make change happen, “it is important to make evidence more useful and better communicate it,” she said.