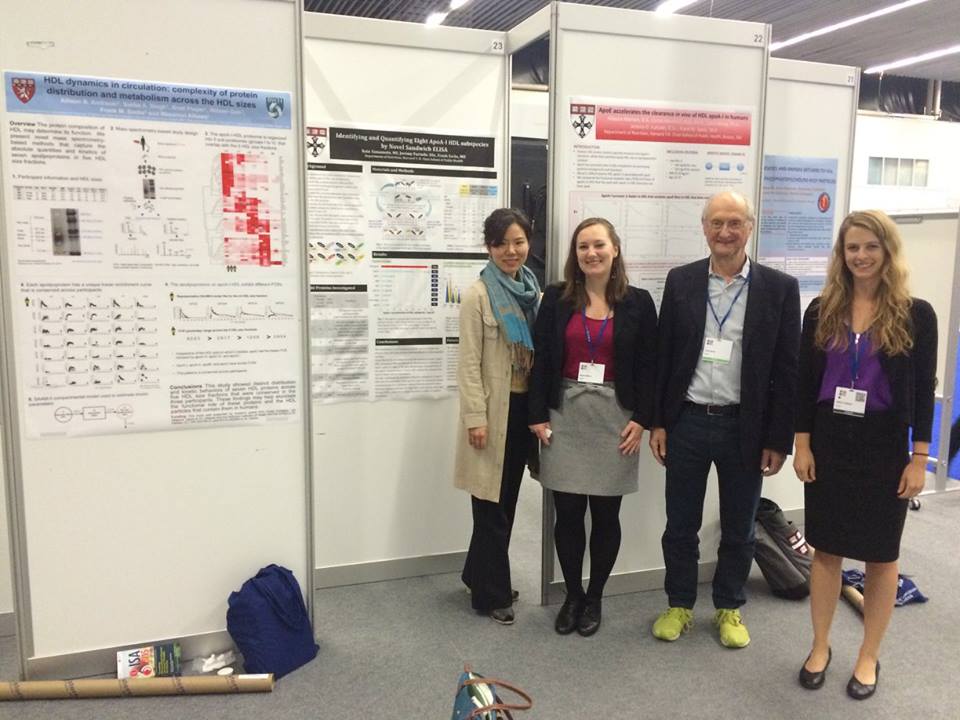 Frank Sacks and three of his PhD students from Harvard School of Public Health, presenting work started by a Harvard Catalyst grant at the International Symposium on Atherosclerosis in Amsterdam.

Frank Sacks, MD, is professor of cardiovascular disease prevention at Harvard T.H. Chan School of Public Health, professor of medicine at Harvard Medical School, and a senior attending physician at Brigham and Women’s Hospital (BWH). He was among the first investigators to receive our pilot funding awards back in 2010.

You were an established researcher when you received pilot funding from Harvard Catalyst in 2010. How did the funding support your work?

The funding really catalyzed 10 years of novel research on human HDL, which is known as the “good cholesterol,” but which we eventually found is not totally true. By 2009, I had completed 15 years of research on the metabolisms of LDL, VLDL, and apoB lipoproteins, and decided to change my focus to HDL. The HDL system was also an established risk factor for cardiovascular disease, but its secretion and metabolism had never been explored at any depth, particularly in humans.

“The $50,000 from Harvard Catalyst gave us our shot. We performed metabolic studies on a few research participants and demonstrated for the first time the existence of protein-defined HDL subsystems.”

But despite all my experience with lipoprotein research, I was unable to obtain NIH funding, largely because we didn’t have pilot data to show feasibility. The $50,000 in pilot funding gave us our shot. We performed metabolic studies on a few research participants and demonstrated for the first time the existence of protein-defined HDL subsystems. For example, there is a type of HDL that contains apoE lipoproteins and another with apoC3 lipoproteins, which have opposing effects on metabolism and risk of diabetes and cardiovascular disease.

My lab eventually identified 17 different kinds of HDL based on the protein that it carries and the protein’s function. We showed each have completely different metabolism, and that some types of HDL, in fact, seem to be harmful, in terms of heart disease risk. To devise drugs or recommend diets to control HDL, it’s important to know how the system works.

That funding, which resulted in a five-year NIH grant, was transformative. I can trace 17 research publications on HDL with lineage to that grant, and it formed the basis for the doctoral dissertations of four Harvard Chan School students.

How does your research benefit patients who are trying to reduce their cardiovascular risk?

For one thing, we now know that just raising the total amount of HDL is not necessarily a good thing. We have to know the type of HDL that increases to understand whether it’s a beneficial indicator. Our work points the way to a simple test that could measure the blood concentration of the HDL subtypes, but we need to streamline our methods before it can be added to lab test platforms. The ultimate goal is a drug or other treatment method that would increase just the good HDL or decrease the type that isn’t beneficial.

You’ve headed several major, multicenter trials related to diet and the reduction of major risk factors for cardiovascular and other diseases. What’s the healthiest diet?

“The whole approach to nutrition has changed from setting goals around limiting the percent of carbohydrates or fat in a diet to establishing healthy dietary patterns.”

In addition to my research into lipoproteins and how they’re metabolized, I study dietary patterns, such as the DASH diet, which was initially designed to reduce hypertension. I also compare diets with different compositions to see which could be used to lower LDL cholesterol or reduce the risk of diabetes. The results of those studies — done in partnership with the Center for Clinical Investigation at BWH — are now part of national and international guidelines for healthy eating.

The whole approach to nutrition has changed from setting goals around limiting the percent of carbohydrates or fat in a diet to establishing healthy dietary patterns. That was really the innovation of the DASH study. We devised a dietary pattern that was applicable to disease prevention, that people liked to eat, and that is easily teachable. The DASH diet and others like it — including the Mediterranean diet — have a moderate amount of carbohydrate-rich food, especially whole grains, green leafy vegetables, peanuts and other tree nuts, fish and chicken, and less red meat. Healthy dietary patterns have fewer foods with added sugar like desserts and sweet beverages.

What are you studying now?

Epidemiology suggests that cognitive decline with aging is not inevitable and can be lessened or prevented by a dietary pattern such as the Mediterranean and DASH diets. My current study, called MIND,  is examining whether a diet that is a mix of the DASH and the Mediterranean can prevent cognitive decline. It’s a three-year randomized control trial in people ages 65 to 84. Unlike previous studies, we’re actually studying cognitive changes in the age group who are at risk for cognitive problems.

We’re very excited and hope to present results later this year. Physical activity has been linked to cognitive benefit in older people. I suspect ultimately that guidelines for preserving cognitive function will include dietary as well as physical activity recommendations.

What have you been doing in your spare time?

I got married at the beginning of the pandemic and we both sold our homes and bought one together. We’ve been continuously renovating it the entire past year! But now I’m hoping to take up the jazz saxophone again and continue learning Japanese. I find Japanese to be a fascinating language because its culture is embedded within it. Perhaps we’ll live in Japan for a few months.