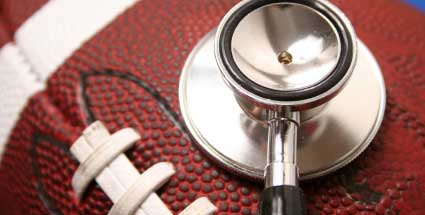 Professional football players appear to have a somewhat elevated risk of death, including  higher risk of succumbing to cardiac and neurodegenerative diseases, compared with professional baseball players of similar age, according to new research.

The findings raise important questions about sport-specific differences in disease development and the mechanisms that drive the elevated risk. Such mechanisms mandate further research, the investigators said.

This particular study was not designed to elucidate the reasons for the elevated risk seen in NFL players, nor was it intended to examine the mechanisms that fuel disease development in these athletes, the investigators caution.

The analysis—the first head-to-head comparison between elite professional athletes of similar ages—is published May 24 in JAMA Network Open. The work was conducted by investigators at the Harvard T.H. Chan School of Public Health, Harvard Medical School, and Spaulding Rehabilitation Hospital.

The findings are based on a retrospective analysis of death rates and causes of death in 3,419 NFL (National Football League) and 2,708 MLB (Major League Baseball) players over more than 30 years.

There were 517 deaths among NFL players and 431 deaths among MLB players between 1979 and 2013. The difference translates into a 26% higher mortality among football players compared with baseball players.

NFL players had a nearly threefold greater likelihood of dying of neurodegenerative conditions, compared with MLB players. They also had a nearly 2.5-fold risk of dying from a cardiac cause, the study showed.

There were 498 deaths stemming from cardiovascular causes among the NFL players and 225 such deaths among MLB players. The study identified 39 deaths from neurodegenerative conditions such as Alzheimer’s disease, ALS, and Parkinson’s in NFL players and 16 such deaths in MLB players. There were 11 suicides among the NFL group and five in the MLB group.

“Even a single preventable or premature death is one too many, so it is critical for scientists and clinicians to pursue further research into teasing out the reasons behind this increased mortality,” said study senior author Marc Weisskopf, the Cecil K. and Philip Drinker Professor of Environmental Epidemiology and Physiology at the Harvard Chan School. “However, it is important to remember that the actual number of additional deaths from neurodegenerative diseases among football players remains low.”

The results point to the existence of sport-specific differences in sport-related injuries and athlete conditioning as important contributors to disease development. For example, head trauma, repetitive head injuries, and subconcussive blows in NFL athletes may contribute to the onset of pathologies that eventually lead to certain neurologic conditions, the researchers said.

Football players’ larger overall size and greater body-mass index, which renders them more susceptible to hypertension and sleep apnea, can also be contributors, the researchers added.

For their analysis, the researchers used vital statistics obtained from two national databases—the National Institute for Occupational Safety and Health for information on NFL players and the Lahman Baseball Database of MLB players, an index combining data on MLB and predecessor leagues no longer in existence.

The researchers then cross-referenced death outcomes from these two databases with information obtained from the National Death Index, a federal database that tracks causes of death occurring within the United States.

“Elucidating sports-specific aspects of disease development is critical for our ability to inform best strategies to maintain optimal player health and prevent disease.”

In a somewhat more meaningful comparison, a recent study analyzed death outcomes among NFL players and replacement football players who played during an NFL players’ strike. This research found a small but statistically insignificant increase in death rates among NFL players.

A comparison between two groups of professional athletes with similar physical characteristics, levels of conditioning, and overall health status can tease out more meaningful differences in risk directly attributable to playing one sport versus the other, the investigators said.

Understanding whether and how certain sport-specific activities may fuel the development of diseases is essential to informing appropriate interventions, the researchers said.

“A life in pro football  may have lifelong consequences, particularly  in the domains of cardiac and neurologic health,” said Ross Zafonte, the Earle P. and Ida S. Charlton Professor and head of the Department of Physical Medicine and Rehabilitation at Harvard Medical School.

“Elucidating sports-specific aspects of disease development is critical for our ability to inform best strategies to maintain optimal player health and prevent disease,” Zafonte added. “This study illuminates the importance of former players taking an active step in seeking a comprehensive health evaluation from their doctor. They should ensure they are closely monitored for both cardiovascular and neurological issues, some of which may be treatable.”

Funding disclosures: This work was supported by the Spaulding Research Institute and by grant P30 ES 000002 from the National Institutes of Health. Nguyen was supported by grant T42 0H008416 from the National Institute for Occupational Safety and Health. Zafonte, Pascual-Leone, Speizer, Baggish, Taylor, Nadler, Weisskopf, Courtney and Connor received support from the Football Players Health Study at Harvard University.

For other relevant and/or conflict-of-interest disclosures: doi:10.1001/jamanetworkopen.2019.4223