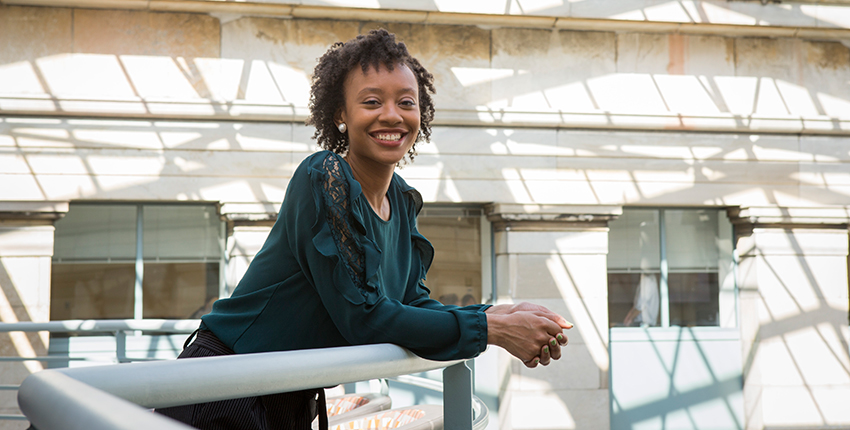 For Kia Byrd, MPH 2018, MD 2019, medicine is a platform. It’s a way to help underserved individuals and communities on a systemic basis.

Byrd was born in Jackson, Mississippi, where she lived until she was about 11 when her family moved to Arkansas. Growing up African American in middle class communities in the South had a profound impact on her, she said.

On the one hand, being tied to southern African American cultural traditions gives her an enduring source of pride, she said, but being brought up in two of the poorest states in the U.S. also meant that she saw a lot of need, particularly around healthcare.

“You grow up seeing the impacts of not having a medical specialist in the town,” she said, “Or what are the manifestations of health when patients don’t have a primary care physician or when they don’t have health insurance.”

Living in and experiencing these difficult realities, Byrd said, made her want to make a positive difference as a healthcare provider.

Her interest in studying medicine was amplified by the time she spent in hospitals during her youth when her older brother had to have a kidney transplant. Seeing African American physicians on the wards inspired her.

“You grow up seeing the impacts of not having a medical specialist in the town. What are the manifestations of health when patients don’t have a primary care physician or when they don’t have health insurance?”

“I really saw them as examples of these people who knew so much but were also very caring, who were very supportive, who were very compassionate individuals,” she said. Byrd attended Howard University for her undergraduate degree in biology and described that experience as “the biggest step” in deciding to apply to medical school.

Being at a historically black university associated with a medical school in Washington, D.C., she said she encountered many African American physicians, and many of them not only cared for patients but were also involved in community programs and in local policy making decisions.

Once at Harvard, Byrd earned a master’s in public health with a concentration in health policy between her third and fourth years of medical school, and she expects to graduate with her MD degree this spring. She was accepted into a residency at the University of Texas Southwestern Medical School with a specialty in internal medicine and adds that her education in public health has given her many different ways to look at various aspects of society.

Examining the ways poverty, location, and food insecurity affect public health, for example, has given Byrd “the perspective of not only treating people as individual patients, but also treating them from a more societal standpoint,” she said. This helps her understand her role and limitations as a healthcare provider.

As a policy intern at Boston City Hall, Byrd said she worked with then-councilor Ayanna Pressley, who is now a member of the U.S. House of Representatives. Byrd worked on Project Focus, a policy initiative exploring the impact of disciplinary policies and school culture on girls of color in Boston Public Schools.

Byrd said once she graduates HMS she hopes to continue with that kind of community work. As she transitions to her residency she will be focused on patient care, but she said she wants to be a “physician plus something else.”

Specifically, Byrd hopes to return to serve and speak for the communities in which she grew up. She hopes that part of her HMS medical training, both as a doctor and a policy maker, will enable her to explore “innovative strategies to deliver better healthcare to people in the southern United States.” Representing underserved communities is central to Byrd’s philosophy. Her passion for social justice and for her medical career definitely influence each other, she said. Having seen the way policies can negatively impact minority communities, she sees medicine as a platform to reach those populations in a positive way.

At HMS, Byrd has been involved with organizations that also stand for those values, including the Student National Medical Association and the Women of Color in Medicine and Dentistry. Through these groups, she said she was able to engage in outreach while also building supportive communities, which she said was among the highlights of her medical school career.

Another powerful experience was a research project Byrd was involved in during the summer after her first year at HMS. She studied the intergenerational impacts of maternal trauma on breastfeeding in Barbados and had the opportunity to travel there to see firsthand the work being done.

“Having the opportunity to go and see another population of women of color in the Caribbean, to look at how differently they do things, in regards to mental health and self-care,” she said, was one of the most memorable experiences from her research with HMS.

Spending time in so many different places has made Byrd aware not only of the differences between people but, more often, the similarities.

That mindset is what motivates Byrd to continue her work, she said, even when medical training is long and hard.  Her goal is simply to care for other human beings.