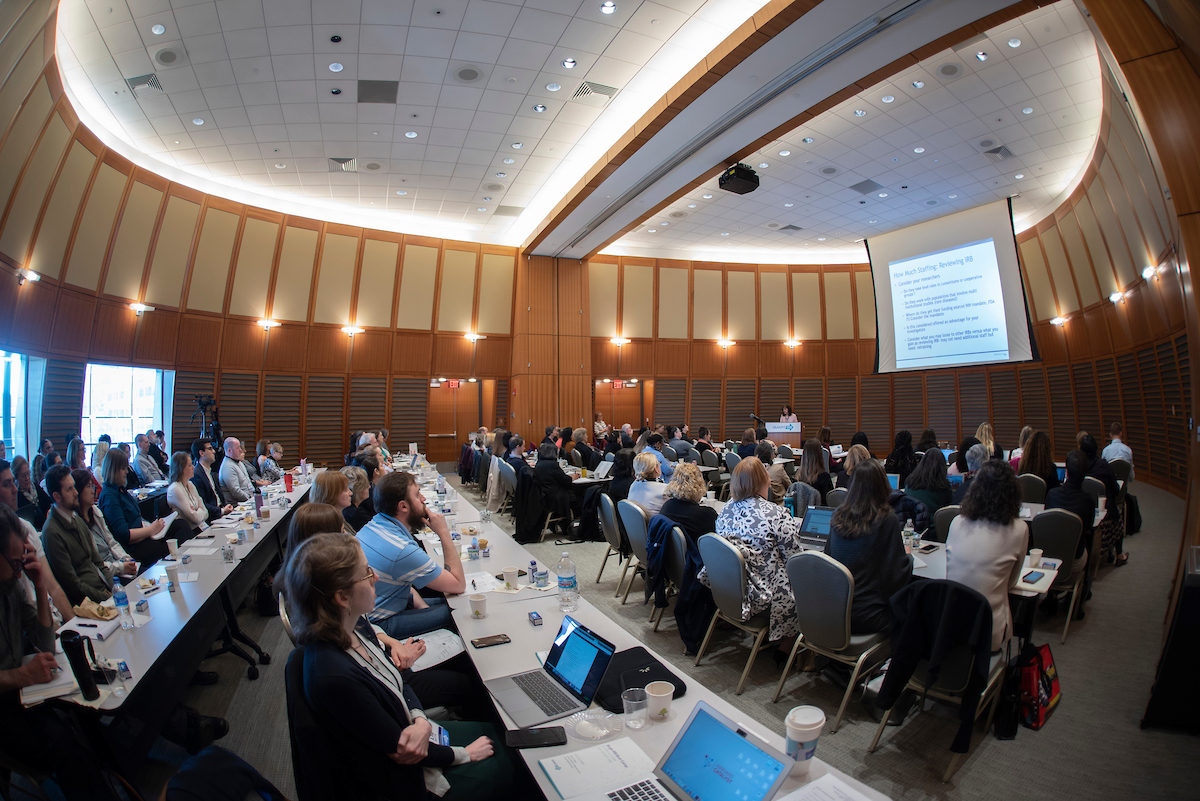 “We are undertaking nothing short of a cultural shift; as we adopt single IRB review across the U.S., teamwork and collaboration are essential—and this community has risen to the challenge.”

Those were the words of Barbara Bierer, HMS professor of medicine at Brigham and Women’s Hospital, as she introduced a training in April that brought together more than 100 regulatory professionals from 21 universities, medical centers and hospitals, private companies, and organizations throughout the U.S, including the National Institutes of Health (NIH). The training was geared to navigate attendees through what’s known as “single institutional review board (IRB) review,” a new requirement that took effect in 2018 that currently mandates, with some exceptions, all NIH-funded studies that involve multiple institutions to cede ethical review to just one reviewing board. By 2020, any federally supported research, also with exceptions, will be required to use a single IRB (per “The Common Rule”).

Federal regulations charge Human Research Protection Programs (HRPP) and IRBs with the protection of the rights and welfare of study participants, as well as provide oversight of a research study. HRPPs also oversee privacy and confidentiality, as well as training for investigators and their study teams, among other responsibilities. HRPPs work under the guidance of the Health and Human Services’ Office for Human Research Protections.

IRBs review research to ensure it meets regulatory and ethical criteria such as minimizing risks, adding protections for vulnerable populations when appropriate, and, with some exceptions, requiring informed consent. The boards also ensure that participants are not coerced or unduly influenced. Because of the complexities and multiple variables at each institution, oversight of research is inherently complex. Add multiple sites to the equation and the challenges and administrative hurdles can be daunting.

To sort through these complexities and share best practices for this new landscape, IRB professionals and HRPP administrators traveled to Harvard Medical School on April 25 to attend a training, billed as a “boot camp.”

“We are undertaking nothing short of a cultural shift. As we adopt single IRB review across the U.S., teamwork and collaboration are essential—and this community has risen to the challenge.”

“Single IRB is a change that will positively impact research, and ultimately, patient health, but it is not without its challenges,” said Bierer, who serves as director of the Regulatory Foundations, Ethics, and Law program at Harvard Catalyst and as director of regulatory policy for SMART IRB, also based at Harvard Catalyst. Bierer has been a champion of harmonizing IRB policies and procedures for institutions across the U.S., and co-leads, with the NIH, a committee charged with this task.

Just over ten years ago, the idea of a centralized mechanism that would facilitate research across multiple institutions was virtually inconceivable. Oversight of research studies involving multiple sites used to be, with some exceptions, a decentralized process where each institution separately reviewed each study using their own applications, processes, and policies. With this new mandate that went into effect last year, the NIH is enforcing a streamlined approach (Harvard Catalyst’s funding agency, the National Center for Advancing Translational Sciences, also funds SMART IRB). Conducting a multisite clinical trial is an opportunity for researchers to recruit participants across multiple sites, which can yield larger and more diverse sample sizes and potentially, lead to more efficient recruitment and earlier study results. And for other types of research, such as qualitative psychosocial studies, a larger study enrollment can strengthen the diversity of the data.

An agreement and a system

In 2014, a national platform called IRBRely was developed based on the Harvard model. This platform was later replaced by the NIH-funded Streamlined, Multisite, Accelerated Resources for Trials (SMART) IRB agreement and online platform, which was made available in 2016 and 2017, respectively. Institutions have the option to join the agreement, with or without using the online platform, which serves as a “one-stop shop” to request, track, and document reliance agreements. Since its roll out in 2017, more than 560 institutions have joined the agreement. Currently, there are more than 2100 online system users, and just over 1000 studies have completed documentation of reliance arrangements. The SMART IRB team includes “ambassadors” throughout the U.S. who encourage institutions to join and who make available training, support, and resources.

The opportunity to collaborate across sites through the use of a shared agreement and to work within a centralized system has long-term benefits for both investigator teams and institutional officials. For one, working in one tracking system replaces the burdensome task of separate communications streams to establish and document reliance. This mechanism also becomes a critical conduit between the principal investigator, the IRB that agrees to review for all institutions on the study, and the relying institutions, the institutions that agree to cede their respective reviews to the reviewing IRB.

Nichelle Cobb, director of the Health Sciences IRBs Office at the University of Wisconsin-Madison and director of SMART IRB operations, explained that SMART IRB represents the culmination of a cultural shift for IRBs. “We are moving from an internally-focused review to working with other institutions to effectively oversee human subjects’ research and ensure protection of study participants.” Cobb led the training together with Bierer, offering insights and best practices from her nearly 20 years’ experience as an IRB professional.

Discussions throughout the training centered around internal processes within institutions that are adjusting to the new reality of single IRB review (abbreviated as “sIRB”). The morning sessions included back-to-back presentations on how institutions might adapt to these changes, considering both the process of serving as the reviewing IRB and acting as a relying institution. Presenters also highlighted key resources, forms, and documents developed by SMART IRB. One point that was emphasized throughout the day is that much of the single IRB process now falls under the HRPP at each institution. This adds new responsibilities including reviewing the institution’s reliance process, educating and preparing study teams, and evaluating harmonization of processes and policies.

Susan Kornetsky, director of clinical research compliance at Boston Children’s Hospital, walked the group through the resources and staffing that should be considered when staffing a reviewing IRB. “Serving as a reviewing IRB increases exponentially the work for that (study) protocol,” noted Kornetsky. She outlined how this role creates different, as well as additional administrative responsibilities than those undertaken by an institution’s existing personnel. Her recommendations included developing and training a dedicated staff member for this task, providing education for the reviewing IRB and lead investigator, and being prepared for ongoing contact with the relying institution. Finally, she noted that it’s imperative for reviewing IRBs to estimate the time, effort, and costs required to implement single IRB review, including the use of electronic systems that track reliance arrangements.

Shifting to the needs of relying institutions, those that agree to cede review to the reviewing IRB on a study, Kimberly Summers, director of the research protection programs at the University of Texas Health Science Center at San Antonio presented the “before-and-after” organizational charts her office created. “Single IRB review doesn’t mean I’m going to reduce staff—we don’t have less requirements, just different requirements,” she said, noting that workflows may need to change and IT systems may need to be revised to track new information.

She also offered another consideration: “Maybe it’s not the IRB you come to first, perhaps there are new gatekeeping pathways that should be created.” For this to happen, HRPP personnel may need to be added or redeployed at some institutions. Finally, Summers emphasized the importance of a solid communication plan which helps both investigators and study teams understand their respective responsibilities.

For principal investigators and study teams based at relying institutions, it’s important they receive education and support, explained Adrienne Meyer, assistant director of reliances at the University of Washington, in the second part of this session. “IRB review is only one component of initiating research at an institution. We provide leadership to our researchers to navigate through this process; they know they have a place to go to help them.”

What investigators and study teams need

Erica Denhoff, intervention trials education program manager who works for the Experimental Therapeutics/Interventional Trials Center at Boston Children’s Hospital, shared anecdotally her experience of working collaboratively with investigators on a clinical trial. The study sponsor, a pharmaceutical company, turned to Denhoff to explain the requirements to conduct a trial with 25 sites. Only 15 sites ultimately decided to execute reliance agreements and use the single IRB model, while the remaining ten sites decided to use their own IRBs.

“Some sites felt uncomfortable relying on an outside IRB,” she said. As she worked to assist the company, she realized that they too required guidance at every step through this unfamiliar territory. “Even if it’s a large global company, don’t expect they’ll know what they’re doing when it comes to single IRB review,” she said. One of her takeaways from this experience is that study teams should begin working early with the reviewing IRB and the reviewing IRB administrator: “There’s no such thing as over-communicating; there are many pieces to the reliance puzzle.”

Afternoon sessions included a demonstration of the online reliance system by the SMART IRB informatics’ team led by Doug MacFadden, chief informatics officer for Harvard Catalyst, along with presentations by Daniel Alderson, associate director of regulatory affairs operations for SMART IRB. The steps for operationalizing the reliance process, he noted, include setting up the agreement, deciding on the use of system, and choosing electronic or paper documentation. One key takeaway was that the process of facilitating a single IRB does not mean reduction of the workload for local processes within each institution, and may in fact increase it. In some cases, the local processes and procedures at each institution may need to be reevaluated or revised.

In his role “behind the scenes” as the associate director of SMART IRB, Alderson works closely with the informatics team. When a team member asked him how long reliance requests might remain waiting in the system before completion, he responded, “Anywhere from two minutes to two years.” Underlining that there are multiple factors that complicate single IRB, Mike Bingham of University of Wisconsin-Madison added, “The ‘s’ in sIRB does not stand for “simple.”

To truly make this process efficient for all parties and to keep an eye on the ultimate goal of single IRB review—and to positively impact patient health—communities of SMART IRB early adopters and users are coming together to share best practices, build consensus, and offer tips and guidance. To this end, thought leaders met during an invitation-only event on April 24, the day before the boot camp, to work through emerging issues.

While the complexities inherent in adopting single IRB review will continue to present challenges in the short-term, this new spirit of leadership and cooperation will positively impact the way we conduct ethical oversight and collaborate on critical, and often life-saving, research.