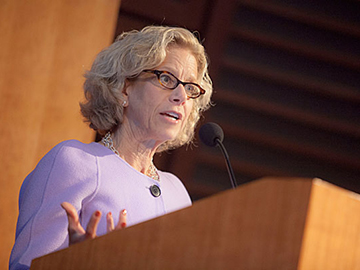 A new, noninvasive genetic screening test for Down syndrome could allow more women with high-risk pregnancies to avoid amniocentesis and in the future could provide detection early enough for treatment to improve some babies’ cognitive function, said neonatal genetics expert Diana Bianchi at a symposium at Harvard Medical School on Oct. 8.

“There’s always a tremendous amount of interest in the health of the unborn child. The idea that you can get sequence information and intervene is really the exciting part for the future,” Bianchi, who is executive director of Tufts Medical Center’s Mother Infant Research Institute, said after her lecture.

“On the other hand, where is it going? How much do you want to know prenatally?” she added. “I’ve always said it’s important to know about things that are actionable. You can find out about all these gene variants [for which there is little data about clinical relevance], and what are you going to do except worry about it?”

Enthusiasm about the future of pediatric—and even fetal—genome sequencing, and discussion of the ethical questions that arise as new technologies emerge, formed the backbone of “Transforming Child Health through Genome Biology.”

Sponsored by Harvard Catalyst, the clinical and translational science center that supports research across the University, the afternoon symposium also featured Joshua Boger, founder and former chief executive officer of Vertex Pharmaceuticals, and Robert Green, HMS associate professor of medicine and director of the G2P Research Program at Brigham and Women’s Hospital.

Boger described his company’s years-long struggle and ultimate success in developing the first FDA-approved drug that improves the amount and function of a protein that is damaged due to a genetic mutation found in cystic fibrosis. He offered his method as a model for other researchers working on treatments for diseases caused by single gene mutations, noting that a simple cause does not necessarily translate to a simple solution.

He also pointed to a current clinical trial in which participants with rare genetic mutations serve as their own controls by being repeatedly cycled on and off treatment and compared to themselves. Trial medication and other materials are sent to their homes. Boger called it the “trial in a box” method.

“I think it will be the way all clinical trials are done in the future,” he said.

In the final symposium session, Green discussed his involvement with studies that ask broad questions about the intersection of genetics, health care, the personal-genome industry and the public. Green and his colleagues have investigated the integration of genome sequencing into health care (MedSeq) and the benefits and drawbacks of genome screening for childhood risk and newborn illness (BabySeq).

“Some questions we’ve been thinking about for over 10 years now are: Can genetic information be used in an efficacious and cost-effective manner? Is genetic information dangerous? Is it going to be misunderstood? Does it improve health? Does it provide non-health benefits? The answers may be entirely different depending on what kind of genetics or tests we’re talking about,” Green said.

Green underscored some of the pitfalls of screening raised earlier by Bianchi, including the potential for physicians to learn uncomfortable information unrelated to the desired test and face the difficult decision of whether to share it with patients. Bianchi had also emphasized the pressure not to make a mistake, since results may prompt parents-to-be to terminate a pregnancy.

At the same time, Green said, advances are revealing “cool information” that, if handled responsibly, can better inform parents about their children’s health and their own family history.

The symposium opened with a welcome from Ellis Neufeld, HMS Egan Family Foundation Professor of Transitional Medicine and associate chief of hematology/oncology at Boston Children’s Hospital and co-chair of the Harvard Catalyst Child Health Committee.

“These [presentations] are just three examples of where technology and child health are meeting and have the potential for changing lives and changing paradigms for screening and treatment,” said Neufeld after the symposium. “Questions arise like if you could get your whole genome back for $1,000, what would you do with the information? It’s probably worth everybody paying attention to examples about how this is going to work.”

“These [presentations] are just three examples of where technology and child health are meeting and have the potential for changing lives and changing paradigms for screening and treatment,” said Neufeld after the symposium.

James Ware, the Frederick Mosteller Professor of Biostatistics and associate dean for clinical and translational science at the Harvard School of Public Health, gave a brief history of Harvard Catalyst, which was founded in 2008 as one of 60 centers dedicated to translating research findings into treatments that benefit patients. The program received word in September that its major funding grant, from the National Institutes of Health’s National Center for Advancing Translational Science, had been renewed for another five years.

The event was affected by the ongoing budget controversy in Washington, D.C. One of the scheduled speakers, Alan Guttmacher, director of the National Institute of Child Health and Human Development, had to cancel his appearance.

Adapted from a Harvard Gazette article