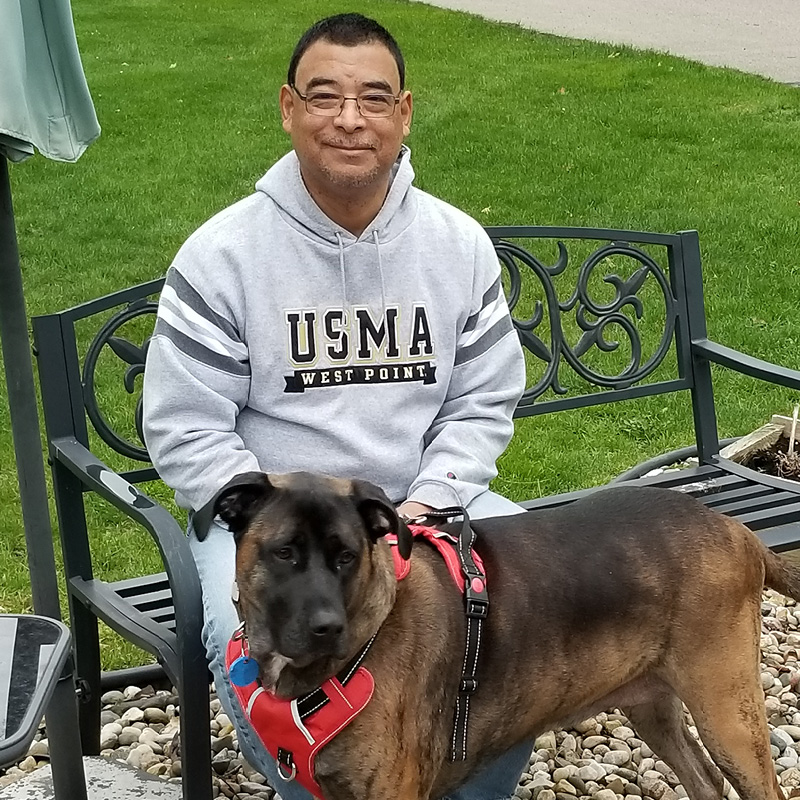 In the summer in 2015, years before the CRISPR babies were even a gleam in He Juankui’s eye, Gerald Lilly, MD, MPH, was offered the opportunity to work on CRISPR gene editing with a Harvard Medical School (HMS) oncologist through our Visiting Research Internship Program (VRIP). He was a second-year med student from the Midwest wondering which way to go next when he was accepted into the eight-week mentored summer research intensive. The experience sparked a love of science that he’s still chasing.

Today, Lilly stands out in an elite group of Americans awarded Presidential Management Fellowships (PMF), a federal leadership-development program started by President Carter in the 70’s. We caught up with him by Zoom at his home in southwestern Michigan, where he lives with his wife, four kids, three dogs, and two cats.

You’re a 2015 alumnus of the Harvard Catalyst Visiting Research Internship Program (VRIP), but your path there was a bit different than most. What was your experience?

When I was accepted into VRIP, I was a second-year medical student with a family and a whole previous career. It helped me to understand that I really wanted to do science with my MD and get more experience in the lab. I didn’t see direct patient care as my primary role, and that’s not what I’m doing in my career. I want to affect people by helping advance the science. VRIP enlightened my path.

I was really excited to have Daniel Bauer, MD, PhD, of the Dana-Farber Cancer Institute and Boston Children’s Hospital as my VRIP mentor. He works in biological and genetic research on blood cell diseases, which interested me. It’s not where I took my career, but I learned how much discovery excited me. At that time, science was just beginning to explore how to alter or enhance genetic elements and produce downstream effects. My VRIP research project used CRISPR gene-editing technology, which was still new in 2015, to change one of the genes that mediates red blood cell hydration. The research was later published, and I received an acknowledgment in the paper for my lab work.

You are now in the midst of a two-year Presidential Management Fellowship (PMF), assigned to the CDC. What does your current job entail?

My PMF assignment is as a public health analyst at the World Trade Center Health Program, which is run by the National Institute for Occupational Safety and Health (NIOSH), a division of CDC. I’m in a new quality management and program evaluation unit that was established in 2020, right before I started. We evaluate hospital metrics and program operations, essentially to make sure that the program is doing what it’s supposed to do, which is to ensure continued care and health monitoring for 9/11 survivors and first responders.

“[VRIP] helped me to understand that I really wanted to do science with my MD and get more experience in the lab.”

PMF is a two-year program with an option to take additional leadership training, which I did. The idea is to bring people with advanced degrees into leadership positions across government. I’m in Health and Human Services, but fellows are embedded across various departments. It’s really an exciting program. When I found out about it, I thought this could be a door for me into a government career.

A quick scan of the 2021 PMF Fellows reveals only a handful of people of color, including yourself, in a class of about 100. What has been your experience as a Black man in leadership in America today?

I’ve had plenty of experiences over the course of years where I’ve been in supervisory roles within manufacturing companies, most recently at Pfizer just before med school. In those kind of leadership roles, I can say there hasn’t been much representation of people of color, especially Black males. In the government generally, there’s not much representation of Black males. President Biden signed an executive order to improve recruitment of under-represented minorities within all agencies of government, so hopefully that situation will change.

Right now, how I see it is I’m just doing the best I can to represent. I try to be the best I can be. Where I work now, I would say there is a lot more representation than in some other agencies, meaning there might be a couple Black males in the division, but no one that I work directly with. I think it’s getting better. It’s just slow. It’s slow.

Prior to medical school you worked in pharmaceutical manufacturing and quality control. Why switch to public health?

Everyone asks me: “What were you thinking?” Leaving Pfizer really was a hard decision because I knew that it wasn’t going to be a financial gain. It’s going to be a loss. It wasn’t because of the money that I got interested in public health [laughing]. I make less now than I made at Pfizer years ago. The public health path is not for everyone.

I have always liked science and never had a good science job until Pfizer. Even then I didn’t actually do science; I did quality control for products developed through science. I supervised the manufacture of Gelfoam®, a material used in surgical procedures to help clot the blood. I remember thinking this stuff really helps people; spine surgeons use it and dentists use it – that’s really cool. That was my first introduction to science on a large scale.

But the Pfizer job got to be pretty mundane after a while. I wanted to jump out and at least see if I could do medicine or nursing or science. So I went back to school, first to get an associate’s at a community college, then for my second bachelor’s degree at Western Michigan University to meet the pre-med requirements. I worked full-time at Pfizer through all of that, right up to starting med school at Michigan State University College of Human Medicine.

I finished my medical degree but opted out of a residency so I could participate in the PMF program. I decided that working for the government in public health is probably best for me at my stage, rather than putting in years of residency before I could land my first job as a doctor. I thought I could make more of an impact with the government and the PMF than going through residency.

Share something people most people don’t know about you.

Before I started med school, my wife and I fostered 50 children over the course of six years, mostly young children, newborn to 9 years old. We were an on-call shelter home, so we would get the emergency placements, kids who had been removed from unsafe environments by child welfare services. Most of them had some sort of physical or developmental disability because of the environments that they grew up in. They were usually short-term placements, a week or two until the children could be placed into a more permanent foster home. We adopted two of them, who are now 12 and 14. We both have a heart for helping kids.