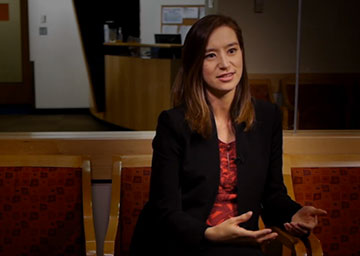 As doctors at Massachusetts Eye and Ear treated patients in the aftermath of the 2013 Boston Marathon bombings, they realized that the tragedy presented a rare opportunity for learning.

Working in collaboration with several other Boston hospitals, principal investigator Alicia Quesnel, HMS instructor in otology and laryngology at Mass Eye and Ear, co-investigator Daniel Lee, HMS associate professor of otology and laryngology, and Aaron Remenschneider, then a fifth-year resident in the HMS otolaryngology residency program, launched a study in April 2013 that is examining post-blast trauma to the ear. The team is following approximately 100 patients who are receiving ongoing care and long-term monitoring at eight Boston-area hospitals. The first data are expected later this year.

Launching a multisite study is typically a time-consuming, cumbersome task, but as Remenschneider began preparing the IRB review process, he learned that Harvard Catalyst offered a method that allows all institutions participating in a study to cede the IRB review to one institution—in this case, Mass Eye and Ear.

“Through working with colleagues at Harvard Catalyst, we were able to submit a unified application and then get site approval at the respective institutions,” said Remenschneider. “The result was that we had a very solid and thorough application and study review that involved individuals at all the different sites.”

This form, available as a free resource to Harvard-affiliated researchers, continues to facilitate additional multisite studies as part of the New England Reliance Agreement set up by Harvard Catalyst’s Regulatory Foundations, Ethics, and Law Program.

Originally an agreement among only Harvard-affiliated institutions, the New England Reliance Agreement now counts Tufts University, Dartmouth College and MIT among its participating institutions, bringing the number of signatory institutions to 26.

Close to 12 more institutions from across New England are actively considering joining the agreement—further expanding the opportunity for streamlined review of collaborative research projects.