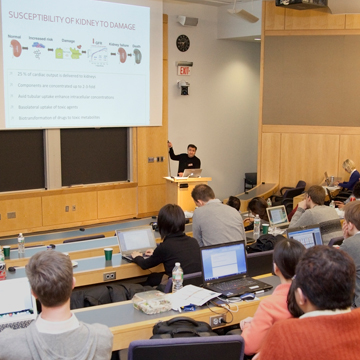 They provide a window into disease, a way to peer into an organism and mine its secrets.  They can illuminate the inner workings of a heart muscle or indicate the presence of infection, and interest in how they work has been growing.

The study of biomarkers may be where the future of biomedical research is headed. Since a 1973 paper first mentioned the term “biomarker,” there has been a two-fold increase in the number of NIH-funded grants that deal with biomarkers.

Between 2000 and 2011, the NIH gave out nearly $10.7 billion worth of grants to roughly 30,000 studies that all had some form of biomarker science, a tenth of which pertained to biomarker discovery, with another 10 percent dedicated to the validation of pre-existing biomarkers.

Nearly 100 members from around the Harvard Medical School community gathered at the Harvard School of Engineering and Applied Sciences this spring to learn more about biomarkers during four days of coursework offered by Harvard Catalyst, Harvard’s clinical and translational science center.

The course, formally titled, “Understanding Biomarker Science: From Molecules to Images,” was filled with information ranging from discovering biomarkers to patenting them and everything in between.

“A biomarker is nothing but a way to classify your body’s abnormal response,” said Vishal S. Vaidya, HMS assistant professor of medicine at Brigham and Women’s Hospital and the director of the course.

“A biomarker is nothing but a way to classify your body’s abnormal response,” said Vishal S. Vaidya, HMS assistant professor of medicine at Brigham and Women’s Hospital and the director of the course.

“Fever, blood pressure, cholesterol levels, X-Ray images, or mutations in genes could be examples of biomarkers that allow us to understand and classify diseases,” he said.

Given this diversity of what constitutes a biomarker, it may seem like our current body of medical knowledge is chock full of biomarkers. Vaidya pointed out, however, that for many diseases, good biomarkers simply fail to exist. Several of the biomarkers currently used to diagnose and treat disease are based on science from decades ago and often can’t detect disease at an early stage.

This lack of viable biomarkers, and the fact that there was no formal biomarker community at Harvard, or even in Boston, led Vaidya to create the course.

“My vision was to start a course on understanding biomarker science for the Harvard community that offers a one-stop-shop to learn about the field,” said Vaidya.

He hopes that the creation of a biomarker community at HMS is the first step toward bringing researchers from different disciplines together to catalyze innovative solutions using biomarkers.

“A problem so complex requires team science. That is, basic scientists and clinicians. To not only talk to one another, but to also involve engineers and material scientists. To devise the best ways to measure biomarkers at the bedside,” said Vaidya.

One of the ways in which Vaidya and his team illustrated this interdisciplinary process was by designing sessions that addressed the use of biomarkers within specific diseases.

James Januzzi, HMS professor medicine at Massachusetts General Hospital and the director of Mass General’s Cardiac Intensive Unit, led a session on heart disease and offered his unique perspective on finding biomarkers for what continues to be the biggest killer of both men and women in the U.S.

As an example, he cited one of the biggest tests for heart failure currently, the electrocardiogram or ECG. While effective, the test also has several shortcomings: it is not easy to interpret nor is it conclusive in its findings.

There isn’t, however, a lack of proposed biomarkers to address the problem: nearly 150,000 papers are published in medical journals yearly, each documenting thousands of biomarkers for heart disease.

The problem, however, is what Januzzi called clinical inertia: many doctors are resistant to the idea of integrating better biomarker science into their current regimen and, as a result, only about 100 of these suggested biomarkers are used in clinical settings.

There are other challenges with diseases such as cancer. Given that cancer affects many different processes in the body, it is harder to identify sensitive and specific biomarkers that are concrete and easy to measure.  The same is true for Alzheimer’s. Since the disease is only just beginning to be understood, the identification of a reliable biomarker is still a distant dream.

During her session on Alzheimer’s, Reisa Sperling, HMS professor of neurology at Brigham and Women’s Hospital, emphasized the need for good biomarkers that would aid in prevention, rather than in treatment, of Alzheimer’s. She was recently awarded an $8 million grant by the Alzheimer’s Association to continue her work on identifying the disease in people who are at risk for it.

“Intervention prior to dementia will likely have a better chance of changing how we treat Alzheimer’s,” said Sperling. “If we can delay dementia by even five years, we can cut the cost of Medicare to treat Alzheimer’s by nearly 50 percent.”

Whether used in prevention or for treatment, biomarkers have to be recognized as telling features before they can be evaluated. Imaging of biomarkers, therefore, was another major focus of the course.

Speakers included Jeffrey Yap, co-director of this course and associate director of the Center for Quantitative Cancer Imaging at the University of Utah, as well as Tina Kapur, executive director of the Image Guided Therapy Program in the Department of Radiology at Brigham and Women’s Hospital.

Kapur’s recent work has focused on the development and use of 3D Slicer, an open-source imaging software that allows users to visualize and examine digital data from specimen three-dimensionally.

The software is being used in a variety of diseases, including cancer, COPD and Huntington’s disease, to better detect the presence and progress of disease.  Since this software is open-source, Kapur encouraged the course attendees to consider using it to help identify biomarkers for their own work.

“Not only is this software available for everyone to use, there is also an extensive community around it,” said Kapur. “It serves as another tool at your disposal to help identify biomarkers.”

Ultimately, learning about the existence of such tools, and acquiring the know-how to identify viable biomarkers, brought attendees to the course. As such, the course ended with a career panel of successful scientists fielding questions about navigating the complicated web of translational biomarker research and offering their own views on the process.

Kapur, for instance, advised the group to keep the passion—whether for research or application—alive.

“If research is something you like to do, you’ll find a way to come back to it,” Kapur said.

Shashi Ramaiah, the Translational Biomarker Head for Pfizer Pharmaceuticals and a faculty member at Texas A&M University, offered insight on the industrial side of biomarker discovery.

“When a pharmaceutical company wants to develop a drug, they approach a biomarker scientist to help them figure out not only what the target biomarker is, but also what the safety biomarker is,” he said.

A safety biomarker, he explained, is something that would need to be kept in check while the drug is in body. “So it might be useful for those of you trying to isolate biomarkers to look beyond just a target biomarker and also identify safety biomarkers before approaching the industry.”

How do you know when a biomarker is integral to a disease’s natural history?

“A good biomarker tears up all the standard paradigms. It should free your mind a bit and give you information to show how wrong you were, so you can have new directions to explore,” asserted Robert Thomas, HMS assistant professor of medicine at Beth Israel Deaconess Medical Center, and one of the attendees of the course.

“Understanding Biomarker Science: From Molecules to Images,” is one of over a dozen courses led by Harvard Catalyst’s Education and Training Program, which continues to make new offerings available each year.

“Our collective understanding of biomarkers is critical for every facet of research, which is why we launched this course,” said Elliott Antman, director of Harvard Catalyst’s Education and Training Program.

“Our hope is that this course will continue to stimulate discussion in this area, and ultimately, help to strengthen the biomarker community at HMS,” Antman said.