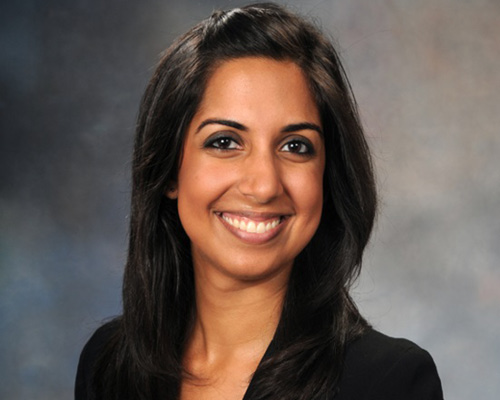 Physician-scientists in the Division of Pulmonary and Critical Care Medicine at Massachusetts General Hospital are leading an innovative research program using in vivo methods to study inflammatory programming in allergic asthma.

“Worldwide, roughly 300 million people have asthma, and so far, all of our treatments have been aimed at symptomatic control. There hasn’t been much progress toward finding therapies that can induce disease remission,” says Jehan Alladina, MD, a physician in the division who leads the research.

Her team aims to change that with research to identify the upstream processes that lead to the development of allergic asthma.

“We hope to isolate those pathways that are the key players in asthma pathogenesis, with the ultimate goal of identifying novel therapies to induce disease remission and prevent the development of asthma.”

“Worldwide, roughly 300 million people have asthma, and so far, all of our treatments have been aimed at symptomatic control.”

A Novel In Vivo Model for Allergic Asthma

Alladina’s primary question is straightforward: Why do some people with allergies develop allergic asthma, while others do not? The answer is complex, and animal research can only reveal so much. A lot of research is based on mouse models, but mice don’t actually develop the chronic airway inflammation and structural changes that define asthma.

“Those models are really studying allergic airway inflammation,” she says.

To better understand the pathways at play in humans, the research team is directly comparing allergic asthmatics to people with allergies, but not asthma. To identify participants, Alladina and her colleagues first perform skin tests to confirm the presence of allergic disease and a methacholine challenge test to confirm an asthma diagnosis. Then, they use a two-day segmental allergen challenge model to study the disease process in the lungs of patients.

This unique model was developed by Alladina’s primary mentor, Benjamin Medoff, MD, former chief of the Division of Pulmonary and Critical Care Medicine, and Andrew Luster, MD, PhD, chief of the Division of Rheumatology, Allergy and Immunology. To conduct the challenge, researchers first collect baseline samples including tissue from the airway mucosa using bronchoscopy with endobronchial brushing. Next, they administer allergens such as cat dander or house mite dust to a small area of one segment of the lung.

“This recreates an asthma exacerbation in a controlled manner, in just one small area of the lung,”  Alladina says. “We can then collect samples and perform a host of studies to determine why some people with allergies develop asthma while others do not, even though they are all sensitized to the same allergens.”

A Potential Role for Trained Immunity in Asthma Pathogenesis

With support from a Harvard Catalyst KL2/Catalyst Medical Research Investigator Training Award, Alladina is using this in vivo technique to study the inflammatory programming of airway mononuclear phagocytes in allergic asthma. Previous research conducted at Mass General, published in Science Translational Medicine, showed that both allergic asthmatics and allergic nonasthmatic controls have an influx of T cells after an allergen challenge and, surprisingly, both groups also have a similar number of antigen-specific T cells that sense and respond to the allergen. But the T cells in asthmatics appeared more polarized to promote type 2 or allergic inflammation.

Alladina’s research builds on that work to determine why this response occurs. Her preliminary studies have shown that mononuclear phagocytes, innate immune cells that can activate and polarize T cells, seem to respond more strongly to allergic stimuli in asthmatics than they do in allergic nonasthmatic controls.

“The response brought to mind trained immunity, the idea that cells are programmed to respond differently to stimuli,” she says.

Trained immunity has mostly been studied in infectious diseases and has not previously been attributed to a disease like asthma. Her findings point toward an intriguing upstream target in asthma pathogenesis.

“There may be some sort of immune training that happens depending on things like environmental exposures, diet, or maternal factors that affect the epigenetics,” she says.

“This is a disease that carries a lot of morbidity, and there’s a definite need for therapies that will induce disease remission.”

To understand how that immune training may occur, Alladina is looking at epigenetic and metabolic pathways in mononuclear phagocytes, the upstream immune cells that polarize T cells. Doing so required a creative approach.

“It’s traditionally been really hard to study mononuclear phagocytes. They change a lot in response to their environment, so it’s hard to define them by classic means including surface markers used in flow cytometry,” she says.

To address that challenge, her team is using a single-cell RNA sequencing technique to identify and compare mononuclear phagocytes in allergic asthmatics and allergic controls.

“This allows us to dissect at the cellular level the heterogeneity of this immune cell type,” she says.

In addition to comparing allergic asthmatics and allergic controls, her team is also comparing samples collected from asthmatic participants before and after exposure to an allergen.

The research has not yet been published, but her work points to some intriguing differences between the asthmatic and nonasthmatic participants. “Our findings suggest that mononuclear phagocytes in allergic asthmatics seem to be arrested in an immature state and more primed to be inflammatory,” she says. This may point to a key dysregulation in immune signaling that could drive asthma pathogenesis.

Ultimately, Alladina hopes her work may point toward new targets for stopping asthma in its tracks. More than half of people with allergic asthma have uncontrolled disease with at least one exacerbation per year, despite the development of new biologic therapies.

“This is a disease that carries a lot of morbidity, and there’s a definite need for therapies that will induce disease remission,” she says.

Allergic disease often begins early in life, progressing in an “atopic march” from atopic dermatitis in infancy to allergic rhinitis and asthma later in childhood.

“By identifying the pathways that lead to asthma pathogenesis, we may be able to halt this atopic march,” she says. “You can imagine a future in which we can prevent the progression to asthma.”