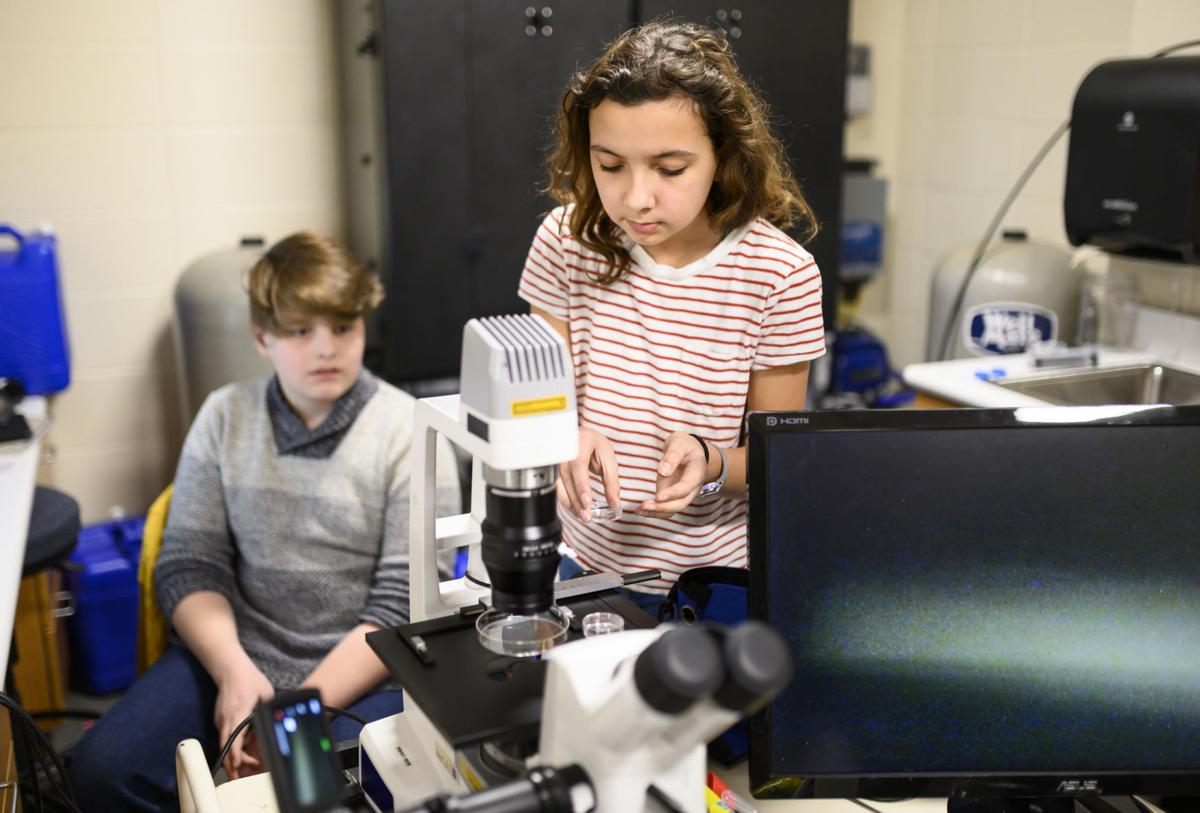 Julia Sanchez, an eighth-grader at Lincoln K-8 School in Rochester, prepares a petri dish to be viewed under a microscope Tuesday at the school. The students are conducting a study to determine if vape oils have any effects on zebrafish. (Traci Westcott / twestcott@postbulletin.com)

She and her peers have been observing the effects of those oils on developing zebrafish.

On Tuesday, Julia Sanchez, another Lincoln eighth-grader, noted that in a high concentration of lavender vape oil, zebrafish had delayed development of their swim bladders. She observed three-day-old fish having trouble swimming.

“They’re trying to get upright, and they just can’t,” she said.

The students use microscopes to chart the development of the fish in various concentrations of water and vape oil. The young fish are almost transparent under light and magnified.

“You can see the blood flowing,” Schulz said.

“It’s so powerful for students to see it firsthand,” he said.

Briggs noted that vaping has nearly erased decades of decline in tobacco use among teens. He said health problems are developing faster by some vape users than is seen in traditional cigarette smokers — regardless whether there’s nicotine present in the vape products.

“A lot of students thought those are fine,” he said.

The first experiments the students conducted had various levels of concentrations of different vape oil in water where zebrafish eggs were hatched. Students said the higher concentration of oils was rough on the fish.

“They just died,” Schulz told Pierett and Griggs in a roundtable discussion of the tests. “It was just a mess.”

“It shows students the ‘why’ of ‘Why does this matter?’” – Chris Pierett

“They should be swimming by day three,” she said.

Other observations, including stunted eye growth (which hints at stunted brain development), were recorded.

“I was just really surprised,” she said. “I didn’t know vape oils could do that.”

“We did witness an aneurysm in a fish,” Pierett said.

Griggs said public health efforts are aimed at prevention and not just treatment of health problems. These experiments could be helpful to demonstrate to teens the immediate health effects vaping can have.

Pierett said he hopes these experiments can be used to help educate kids caught vaping rather than resorting to punitive measures.