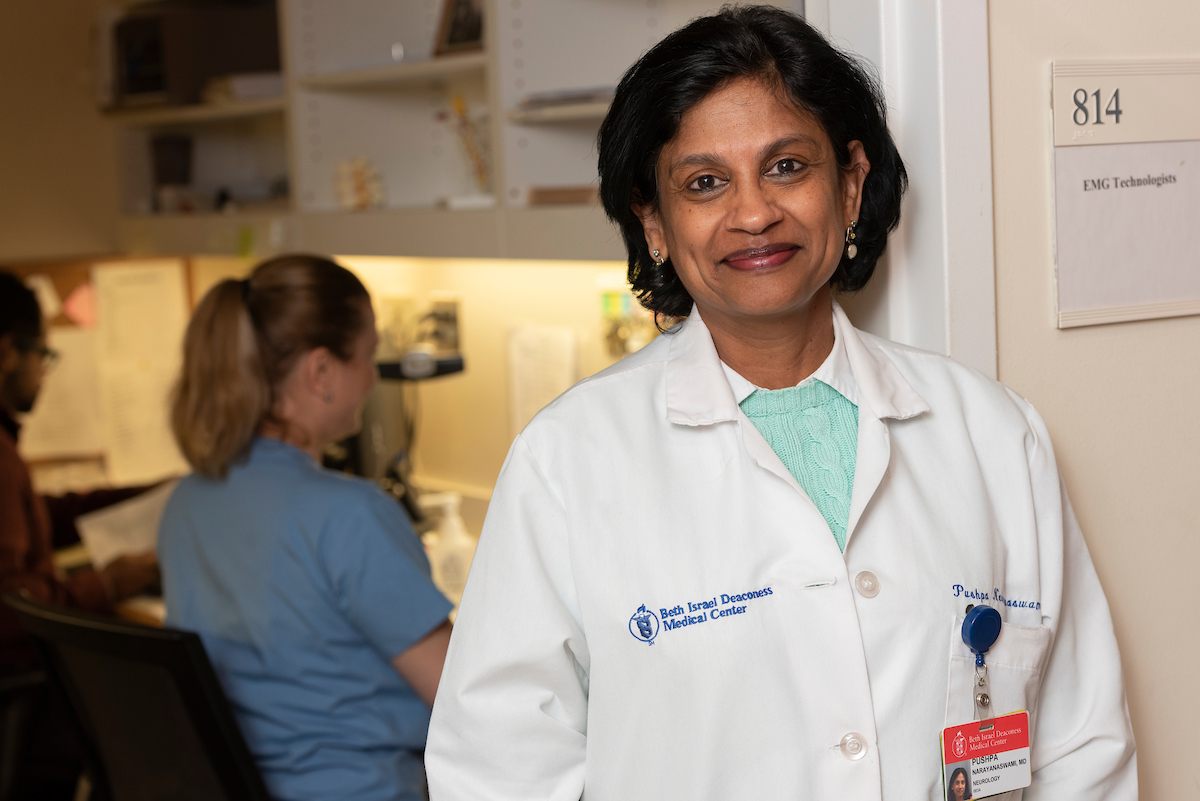 Practicing at Beth Israel Deaconess Medical Center (BIDMC), where she divides her time between patient care, teaching, and clinical research, neurologist Pushpa Narayanaswami always wanted to conduct research. But in India, where she began her practice, research was difficult due to infrastructure and funding constraints.

It wasn’t until 2006 when she arrived at BIDMC that she was able to realize her goal. And Harvard Catalyst, she says, has been with her all the way, offering courses ranging from biostatistics to mixed methods. While she attended some in-person courses, the online courses allowed her the flexibility of fitting the courses around her busy schedule.

“I pretty much have taken every course,” Narayanaswami says. “If a course was offered online that I could review on a weekend, I would take it. Or if I could go on a day when I didn’t have clinical responsibilities, which at that time was really not often, I would take it.”

Today, with Duke University’s Donald Sanders, Narayanaswami is principal investigator on a study focusing on determining the best treatment approaches for patients suffering from the chronic autoimmune neuromuscular disorder myasthenia gravis (MG). Funded by the Patient-Centered Outcomes Research Institute (PCORI), the study, called Promise-MG, will follow approximately 200 patients at 19 sites across the United States and Canada, comparing how well two currently used treatments relieve the symptoms of MG after 24 months. The study will also provide a wealth of data about the course of MG, including variation in care.

“Now is the right time for a study looking at the comparative effectiveness of treatments for MG patients,” she says. “At the moment, there’s so much variation in practice because it’s not easy to get strong evidence for efficacy of treatments in MG. It’s a chronic disease; it’s variable; it’s rare,” she says. “Also, it’s logistically difficult to recruit large numbers of subjects for a randomized controlled trial that is sometimes two years so we can determine the efficacy of the treatments.” she says. The prospective, observational data from this study promises to be enormously useful in standardizing care and improving MG treatment.

Narayanaswami recalls the Harvard Catalyst 35-week certificate course in applied biostatistics she took which gave her a deeper understanding of how to design a strong study. “This course really helped me because I could actually plan a study and ask, ‘Which statistical methods am I going to use?’. You can never have a perfect design, but it is imperative to understand the limitations of the design. It’s also critical to put in place measures to address these limitations at the front end, during recruitment, or at the back end. Reviewing in the analysis stage will minimize the limitations,” she says. Another takeaway from this course for Narayaswami was learning to critically examine and interpret studies through the lens of statistics.

“The fact that these resources and courses are made available to all of us in the Harvard system, and all are free to researchers like me, is incredibly important.”

Harvard Catalyst not only helped develop her research skills, it also helped expand her network of collaborators — colleagues who helped make possible the Promise-MG study. When PCORI’s grant reviewers came back with a number of biostatistical-related questions, Narayanaswami reached out to her course director of Comparative Effectiveness Research (CER), a course she took at the Harvard School of Public Health.  In this conversation, Dr. Niteesh Choudhry connected her to Dr. Rishi Desai, who now serves as co-investigator on the PROMISE-MG study. His insight helped respond to reviewers questions appropriately, leading to funding. “I credit both my CER and biostatistics courses for my ability to plan and write the grant, including epidemiologic and biostatistical aspects,” she says. “ I was able to sit down with my colleagues and say, ‘this is what we are trying to do,’ and ask, ‘what is the best way?’ and, we came up with the study design and analytic plan. It all came together at the right time.”

Narayanaswami believes MG-related research is beginning to gain traction and hopes to be involved in additional MG-related research. “In September 2017, eculizumab was approved by the FDA for MG, the first approved treatment for MG in over 40 years! At this time, there are focused drugs that address the pathophysiology of the disease, and I am involved in a few of those trials.”

And Narayanaswami expects Harvard Catalyst to continue to be part of her future as well. “ I hope to see more courses that address more advanced topics in trial design and biostatistics, and also more opportunities to network with colleagues that research similar areas.” “I am grateful to Harvard Catalyst for its training and support. The center helped me set up my research career, which is what I came to the U.S. to do. I couldn’t be more grateful. The fact that these resources and courses are made available to all of us in the Harvard system, and all are free to researchers like me, is incredibly important.”

If you are interested in participating in this series, we’d be happy to hear from you. Email us at communications@catalyst.harvard.edu.