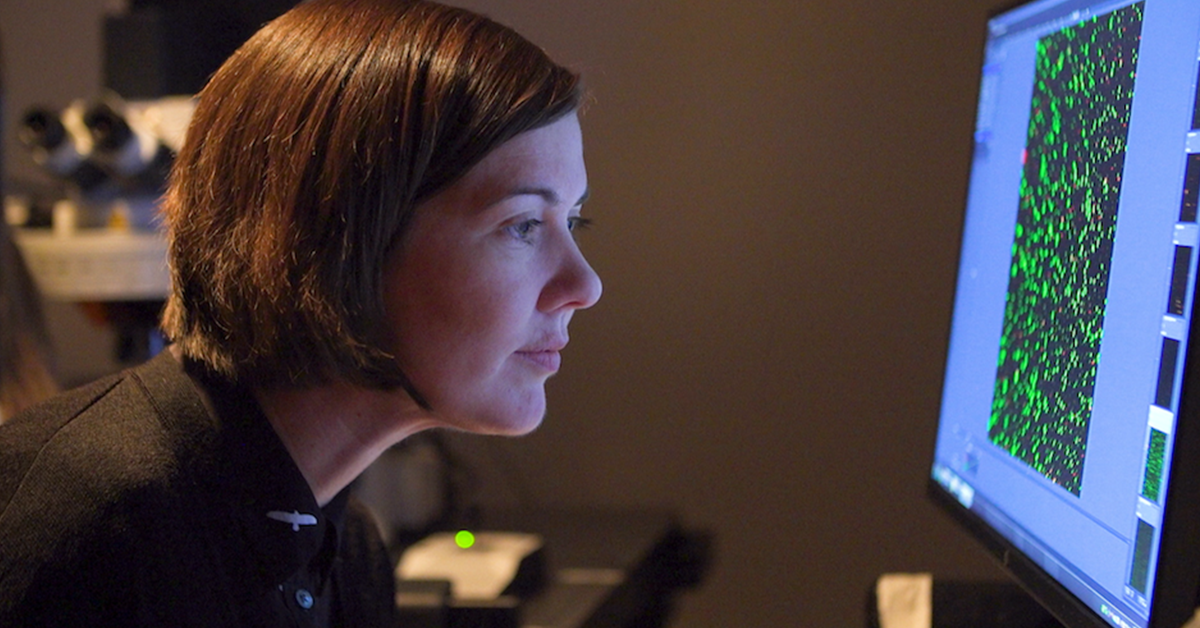 Kate L. Jeffrey, PhD, is an Harvard Medical School (HMS) assistant professor on the faculty of the Harvard Immunology and Virology programs, assistant in immunology at Massachusetts General Hospital (MGH), and an associate member of the Broad Institute of MIT and Harvard. Her project, “Distinguishing immunomodulatory capacity of the enteric virome in healthy and diseased intestine,” received pilot funding in 2018 through our Translational Innovator program.

What motivated you to study the epigenetic control of innate immunity and its importance in the disease process?

When I was a postdoc at Rockefeller University, we were the first to discover a chemical compound inhibitor of epigenetic enzymes, epigenetic ‘reader’ enzymes as they’re called. It was an exciting time. We showed that these epigenetic reader enzymes are essential for the ability of innate immune cells to invoke an inflammatory response. That meant these enzymes are a key therapeutic target in inflammation.

When I moved up to Boston and started my own lab, I began to look for epigenetic enzymes with a designated role in the immune system. That led us to a novel epigenetic ‘reader’ enzyme called SP140, which has genetic mutations within it associated with a number of immunological diseases, including Crohn’s disease, multiple sclerosis, and chronic lymphocytic leukemia.

We found that patients with Crohn’s lack expression of SP140 and that SP140 is essential for macrophages, a type of innate immune cell, to function. When macrophages without SP140 are no longer protective in the gut, inflammation results.

Describe your Harvard Catalyst Translational Innovator project and what you are finding?

Complex immune disorders like inflammatory bowel disease (IBD) are a result of both genetic susceptibility and environmental triggers such as enteric microorganisms. The last 20 years of research has focused almost exclusively on how bacteria in the gut are immunomodulatory and can contribute to disease, but only recently have the role of viruses been appreciated. My lab’s leap into this new frontier of the virome stemmed initially from our work on SP140, as SP140 might be essential for responses to viruses and is lost in IBD. That provoked us to understand how viruses can act protectively in the gut, but also be damaging in IBD.

“The ultimate question is if SARS-CoV-2 gets to the gut in a patient, does it mean a better or worse outcome for the patient?”

First, we collaborated with Rich Hodin, MD, a colorectal surgeon at MGH, and Ramnik Xavier, MD, PhD, who has set up the Prospective Registry in IBD study at MGH (PRISM), to obtain colon resection tissue from patients with IBD. From these tissues, we isolated viruses. Then we observed what happened when we put those viruses, or viruses from healthy controls, on macrophages or intestinal epithelial cells (IEC). What we found was striking. The macrophage or IEC responses triggered by IBD provoked inflammation while viruses from a healthy gut enabled protective, anti-inflammatoy responses. Responses to healthy or diseased viromes were divergent, demonstrating that changes in the virome during disease could really impact the intestine and contribute to disease.

Secondly, we’ve been trying to identify which viruses are protective and which are damaging. There’s an estimated 1031 viruses on Earth, but only about 5,000-6,000 of them are fully sequenced and identified. Rather than just sequence all the viruses in the gut, we’ve been trying to narrow it down to those that are actually in direct interaction with the innate immune system.

We’re using a “fishing” technique called cross-linking immuno-precipitation (CLIP) to identify those that are in direct contact with host viral receptors. We think this might be a way to distinguish the helpful and the damaging viruses. That’s what Harvard Catalyst funded. This paper is currently in revision.

Are you involved in any COVID-related studies?

That’s the plan. It turns out that SARS-CoV-2 most certainly has an enteric phase, or gut phase. With Rich Hodin, we are gradually collecting colon resection tissue from COVID-19 patients. We would like to show that the virus is in colon tissues, which cells are harboring it, and then what the immune response is. The ultimate question is if SARS-CoV-2 gets to the gut in a patient, does it mean a better or worse outcome for the patient? I’d also love to apply that CLIP technique to find out which part of the SARS-CoV-2 genome is detected by the host immune system.

“To me, science itself is an extremely creative pursuit. You need to have a creative mind to be a scientist.”

You came from your native Australia to New York to be immunology editor at Nature Medicine. You also co-founded the New York Imagine Science Film Festival. Why were these activities important for you?

I believe that it is important for us to communicate our science so people will understand the scientific process and realize its value to society and humanity. It is especially important when the bipartisan mistrust of science is rising both in this country and across the world. I thought that being an editor at a journal was going to satisfy my passion to communicate, but it wasn’t the right choice for me. But moving to New York led me to Rockefeller University, where my career was catapulted.

I have many friends in filmmaking and I’m a movie buff. At Rockefeller, Alexis Gambis, a PhD student and part-time filmmaker, and I started a science-based film festival with the idea of making science accessible and removing the stereotypes – that we’re not all gray-haired white men in lab coats. He’s continued this festival all over the world.

To me, science itself is an extremely creative pursuit. You need to have a creative mind to be a scientist.

How has your work/personal life balance fared while working from home?

It’s definitely been challenging. My husband, who is also a scientist, and I have two daughters. On the one hand, I’m valuing this time with them. But I’m working in spurts when my two-year-old is napping and at night when they’re in bed. Still, I’ve managed to get a couple of papers and reviews written, so it’s been reasonably productive, considering.